A rather more cerebral entry into the world of science-fiction cinema, Arrival is nonetheless an incredible exploration of humanity’s relationship with language and how this influences our first contact with an alien race. 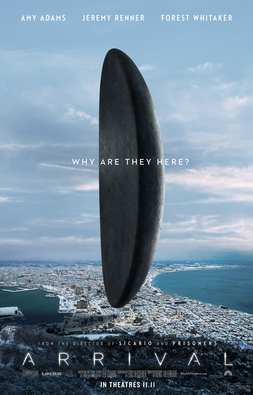 Set in modern day America, the world is thrown into chaos as 12 alien spaceships touch down all across the world. Dr Louise Banks (Amy Adams), one of the world’s most foremost linguists, is teamed up with theoretical physicist Dr Ian Donnelly (Jeremy Renner); and together they must try to communicate with the alien species.

But the panic caused by the alien arrival spreads like wildfire. Country after country begin to see the visitors as a threat and prepare to take any and all action to protect themselves. With Colonel Weber (Forest Whitaker) placing undue pressures upon the duo, the two scientists must discover the alien’s purpose before humanity descends into a global war.

Generally speaking, good science fiction tends to show simplistic ideas or visions of the future. Great science fiction, however, is always a parable. A reflection of our own society shown through the lens of a fantastical future.

These films have been there throughout our cinematic history, from 1959’s Invasion of the Body Snatchers being a commentary on the dangers of McCarthyism, to 1993’s Jurassic Park and its warnings of the increasing dependence on technology; and more recently, 2009’s District Nine exploring the injustice of Apartheid.

Arrival, while on the surface is a basic story about trying to talk to an alien, is really an exploration of just how much humanity has struggled to achieve communication with each other.

With absolutely fantastic acting and directing from the above mentioned trio and Denis Villeneuve respectively, Arrival deserves to take a place next to other thought provoking cinematic entries such as 1997’s Contact and 2009’s Moon.

In a world where the leader of the free world is about to be Donald Trump, the story of Arrival is one of hope. That we can and should be better. And yes, at times we fail in our communication and terrible wars are the result. But sometimes we succeed. And our children, as well as generations to come, are always grateful for it.