I hated The Force Awakens.

Hated with a capital “H.”

In terms of kicking off the return to the Star Wars universe, I felt that JJ Abrams had failed in almost every aspect in bringing such an iconic franchise back to the silver screen. However, my opinion was undoubtedly in the minority as the film ended up being the 3rd highest grossing movie of all time.

While my hopes for Rogue One were a little higher, they sank dramatically as I heard about the behind-the-scenes problems that resulted in extensive reshoots over the summer of 2016.

Nonetheless, I’d like to think that I can be fair when it comes to critiquing a movie. So I entered that screen with my mind as open as possible, ready to once again take a journey to a long time ago in a galaxy far, far away.

Trapped in prison, feisty Jyn Erso (Felicity Jones) is broken out by a team from the Rebel Alliance, led by Cassian Andor (Diego Luna.) It seems her father, Galen Erso (Mads Mikkelsen,) is responsible for helping the Galactic Empire build a new battle station capable of destroying entire planets, and they need her help to find him.

This new “Death Star” project is being led by Director Orson Krennic (Ben Mendelsohn), an Imperial agent desperate to prove himself in the eyes of the Emperor, and willing to do anything to achieve his goal.

Along the way Jyn and Cassian pick up a ragtag team of defectors, warrior monks and droids. Together they must steal the schematics to the Death Star and deliver them to the Rebel Alliance before all hope is lost. But do they succeed?

Yes… Yes they do.

While the knowledge that the Rebels do end up capturing the Death Star plans is widely known, I do have to applaud this film for doing the one thing that all the previous Star Wars prequels failed at: Introducing characters that we’ve never seen before and have no idea what their destiny is.

Think of it like a World War II movie. You already know how WWII ends, but you generally have no idea what happens to the individual characters. Because of this, writers Gary Whitta, Chris Weitz and Tony Gilroy have crafted a very unique movie: A good prequel!

But alas, while the characters are unique, it can’t be said that any of them have been developed enough to be particularly interesting. With the exception of Jyn, we find out almost nothing personal about any of the main cast and because of this it becomes a little strenuous to care about them.

Yes, you could make the argument that the main trio of the original trilogy were similarly underdeveloped, but when watching Rogue One it was hard not to make comparisons to the more accomplished work in Marvel’s Guardians of the Galaxy.

Both films involve a group of 5-6 disparate characters that are forced to come together and put aside their differences in order to work for the greater good. But while GOTG succeeds in portraying this collision of personalities, this type of conflict (and resolution) between the crew in Rogue One isn’t really apparent onscreen. Rather they seem to come together because the mechanics of the plot demand that they have to.

Because of this lack of characterisation, it becomes difficult to emphasise with any of the characters during the first 2 acts, and in turn becomes a slight drag to endure.

That’s not to say there aren’t scenes that would make you pep up considerably. Director Gareth Edwards, fresh off 2014’s Godzilla, brings a sense of scale unseen before in the Star Wars universe. Regular actions sequences, while unspectacular, keep the pace reasonably brisk. In addition, the introduction of long-dead aspects from the world of A New Hope, while a tad uncomfortable for me personally, are mostly a delight to behold and help strengthen the connective tissue between the prequel and original trilogies.

But it’s really the third act that makes the first two worth enduring. Without hesitation, I can say the action packed finale is not just the greatest action scene in Star Wars history, but one of the best sequences ever in Sci-Fi/Action cinema. 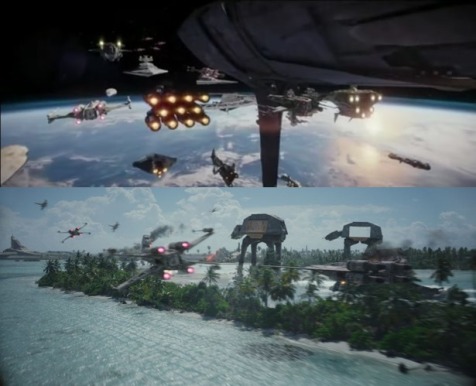 Getting to witness X-wings galore zooming over the frantic ground assault against the powerhouse that is the Galactic Empire is truly a childhood dream come true. Supported by the incredible cinematography of Greig Fraser, Rogue One’s third act is basically a child suitable version of the opening scene from Saving Private Ryan.

While the ending isn’t perfect, with some noticeable narrative disjoints (most likely due to the 2016 summer reshoots); it’s impossible not to get caught up in the all-or-nothing battle that superbly illustrates how much our main characters must sacrifice to bring peace to a troubled galaxy.

Regardless of my previous criticisms, there is one specific aspect that Rogue One (and The Force Awakens) succeeds in. Both films do a great job in introducing the Star Wars universe to a new generation. In the same way that 10 year old me fell in love with Star Wars when watching Phantom Menace; I can easily imagine the same happening to a 10 year old of today.

And in the end, isn’t that what Star Wars is all about?

Photos from: IMAX, Dork Side of the Force, Den of Geek, Nerdist