I recently received an e-mail from the BFI (British Film Institute) saying that, in celebration of Jack Nicholson’s 80th birthday on 22nd April 2017, they would be bringing back the critically acclaimed One Flew Over the Cuckoo’s Nest to cinemas for a limited period.

Having never seen this momentous example of great film making, I decided to check out its IMDB page. And you know what I realised?

God knows how this happened. He’s had such an extensive career and I watch 3-4 movies a week. You would think I’d have watched a couple by accident!

So, in order to correct this tragedy (in the most over-the-top way possible), I will be starting a retrospective where, throughout 2017, I will watch and review every feature length film that Jack Nicholson has either starred or had a strong supporting role in. 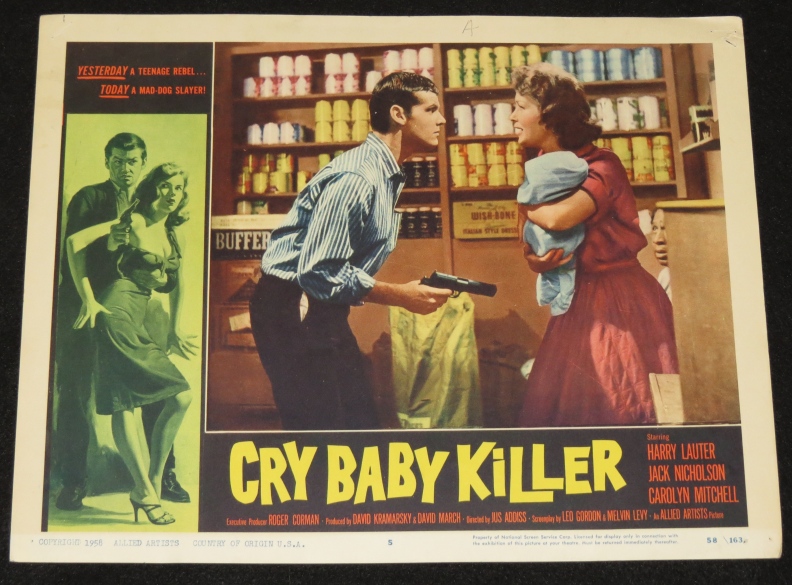 With only one TV credit to his name before this, I can’t even imagine how big of a deal this film must have been for the 21 year old Nicholson. Playing the title character in a Roger Corman produced crime drama? Talk about a breakthrough!

Jimmy (Jack Nicholson) is a 17 year old boy being bullied by Manny (Brett Halsey) and his gang. Having been beaten to a pulp and his girlfriend Carolyn (Carole Fields) having been “stolen” by the aforementioned Manny, Jimmy finally loses his cool.

Going to confront his bullies, Jimmy ends up in possession of a gun and shoots two of his tormentors. Though the two boys survive, Jimmy is unaware of this and flies into a panic. With the police bearing down on him, he ends up barricading himself in a storeroom and taking two hostages: an older black cleaner and a woman with her baby.

Attending the hostage situation is Police Lieutenant Porter (Harry Lauter) who must interview the players of the game and try to defuse the situation.

Coming in at a very lean 61 minutes, I wish I could say this film doesn’t outstay its welcome. But alas,  the writer forces in a bunch of unrelated plot and characters in order to pad its running time. This additional length, mixed with the incredibly low budget (as you’d expect from a Corman picture!) means the film actually ends up feeling more like a tedious play, especially since there are only 3 major locations featured.

Interestingly though, even though the title of the film refers to Nicholson’s character, the protagonist turns out to be Lieutenant Porter. And the film saddles him with the utterly baffling job of interviewing each and every person involved in the events that led up to the shooting. Maybe in a stronger screenplay this might have worked, but in the finished product this just ends up being wearisome.

Accompanying this is also the strange moralistic bent the movie starts upon. I appreciate the late 50s were a different time, but the first 15 minutes are spent showing us the dangers of underage drinking and not respecting your elders. If anything, this wasn’t a film, but a public service announcement!

Subtlety is also no one’s strong suit in this film. In the case of Nicholson it feels slightly more acceptable since he’s meant to be an emotional teenager; but everyone else (especially the female characters) are so over the top you would think World War III was about to start!

Speaking of female characters: the development here makes Megan Fox in Transformers look like Ellen Ripley! For some baffling reason everyone blames the girlfriend for Jimmy going off the rails and taking hostages. (Yes! Because it’s always the woman’s fault isn’t it?)

Nicholson does pretty well with what little he’s given. I won’t go as far as to say you can tell he’ll end up becoming an Oscar winning actor, but there are hints as to the range he might be able to portray if given a better script.

At the heart of Cry Baby Killer there is a fantastic idea of an emotional young boy being thrown into a situation that he has no control over. Personally I think the idea is ripe for a relatively good screenwriter to take this idea and really run with it for modern audiences. Unfortunately what is presented in this version is not just incoherent, but can also barely be called a film