I’m a little curious as to what the thinking was when deciding to adapt the life of Percy Fawcett to the silver screen. Unlike his contemporaries, Fawcett made no particularly grand discoveries or achievements over the course of his life.

Rather, I think the reason for Fawcett’s timeless existence is that, like Amelia Earhart or the Lindbergh Baby, his mysterious disappearance, mixed with his never-ending obsession, has intrigued countless minds for decades. Whether such intrigue can work on screen is an interesting question I look forward to answering. 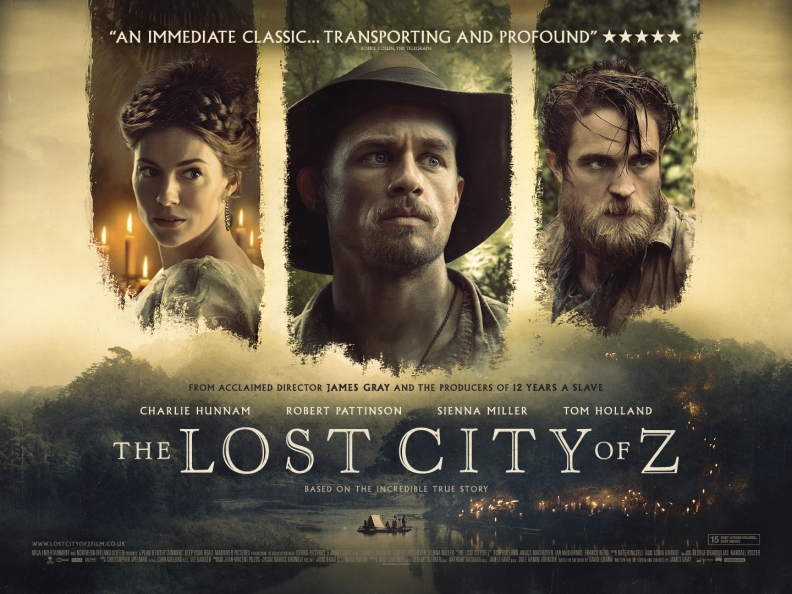 Based on the 2009 book of the same name; The Lost City of Z follows British explorer Percy Fawcett on his near 20 year long search for an ancient lost city in the Amazon jungle. But such dedication is not without struggle and loss as he must contend with dangers at every turn in his pursuit of discovering the truth.

We may only be 4 months into the year, but I am confident in my assertion that Charlie Hunnam has given one of the best performances of 2017. In his role as the disgraced army officer turned surveyor, Hunnam is titanic in his portrayal of a man consumed by his desire to restore his blackened family name.

Said obsession leads him to spending extended periods of time away from his wife Nina (Sienna Miller), and eldest son Jack (Tom Holland); a situation they find incredibly unjust as they make very clear during the few occasions he returns home.

Unlike what most filmmakers would choose to do, director James Grey decides to keep these clashes relatively drama free, instead portraying said disagreements in a far more low-key and measured manner. It’s an interesting (and far more British!) approach.

More of the intense conflicts instead take place in the Amazon, where Hunnam’ character is accompanied by Henry Costin (Robert Pattinson), a silent man who I’m pretty sure would place in the top five of a John Lennon lookalike contest.

While Pattinson gives one of the strongest performance of his career as the loyal Costin, he is heavily underserved by the script. The choice to make the primary supporting character Fawcett’s wife may make sense from a marketing or gender equality point of view; but in the deep darkness of the jungle developing the relationship between these two men would have been far more appropriate.

Having also written the screenplay, I do not envy James Grey in the slightest as the convergence of a slow subject matter set over 2 decades; with a tough location shoot to boot, must have made this film a nightmare to complete.

But such sacrifice was not in vain as the final result is a visually breathtaking film that does justice to the tale of Percy Fawcett and The Lost City of Z.