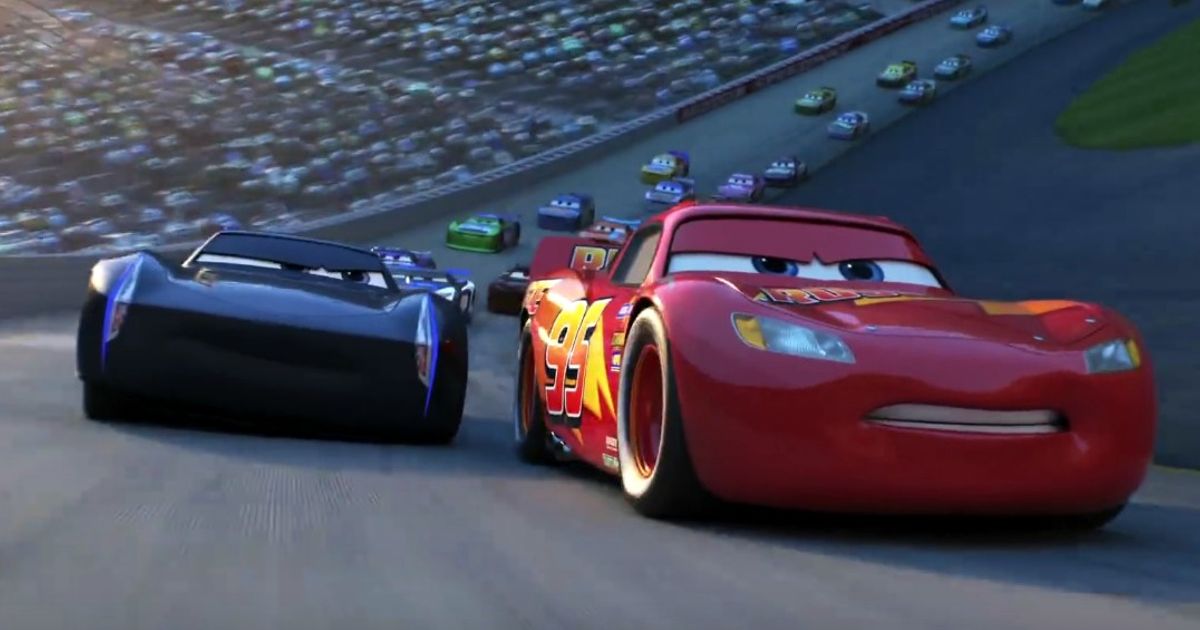 While it may not seem like it on the surface, the Cars franchise is the ultimate example of capitalism overruling art. By this I mean that it has never mattered how critically reviled the films were, because the merchandise sales achieved numbers that were almost unheard of previously.

So of course there was going to be a Cars 2, and now a Cars 3. But is this newest entry a step up from the 39% Rotten Tomatoes tragedy that we saw 6 years ago?

Having been at the top of his game for many years, Lightning McQueen (Owen Wilson) isn’t a young racer anymore. More and more of his friends are retiring to the young bucks that are entering the racing scene; most noticeably the patronising purple speedster called Jackson Storm (Arnie Hammer).

Needing to get back in the game, McQueen teams up with Stering (Nathan Fillion), a rich billionaire, and is put under the tutelage of Cruz Ramirez (Cristela Alonzo).

Finding it difficult to put aside their differing personalities, tutor and trainee must nonetheless work together to try and win the first race of the upcoming season

I’ve often wondered why Cars never struck quite the same cord as other Pixar franchises, and I think its partly down to the fact that Cars was the first franchise which was entirely aimed at children. The well thought out world that we see in Monsters Inc or Inside Out just doesn’t exist inside the domain of Cars.

Indeed, the world itself is still as ridiculous as previous entries. For example, one character mentions the Sistine Chapel. Does that mean there’s a car version of Michelangelo? Is Michelangelo’s David a statue of a naked car?

Cars 3 though, takes a somewhat better approach when it comes to its plot. The choice to put the focus back on Wilson’s McQueen is a welcome one, especially after the disaster of the Mater-led Cars 2.

In fact, the decision to make McQueen an out of shape has-been (as much as you can for a car) is a fairly interesting one. Essentially the film becomes a narrative of how professional athletes deal with aging out of their industry, with the added touch of facing someone far younger and technologically apt than they are.

There may be some that see this as yet another cliche, similar to Rocky Balboa’s homespun training against the mechanical might that is Ivan Drago. But one man’s stereotype can be another’s thematic through line; and being that Cars 3 is aimed at such a youthful audience, I would assume it would come across as far more original than we adults might perceive.

But on a visual level not much seems to have changed or improved over the years. While the eleven year gap between Toy Story 2 and 3 resulted in animation improvements that were plainly Oscar worthy; the eleven year gap between Cars and Cars 3 results in a less noticeable advancement. I would think even the most die hard of Cars fans would be hard pressed to distinguish between any of the three films.

But with all its failings, the actual bond between McQueen and Ramirez is surprisingly touching. In their heart-warming (and fortunately platonic) relationship, we witness the struggles of how realism and pessimism can sometimes crush a person’s dreams before they’ve even taken the first step.

While nowhere near the best of Pixar, Cars 3 still has a little spark in its attempt to tackle issues such as ageism or sexism. With a little more emotion or originality, maybe Cars 3 could have been known for more than just being another entry in Pixar and Disney’s cash cow.