To be perfectly honest, It Comes at Night was not a film I ever wanted to watch.

While I am a great fan of Joel Edgerton, said admiration wasn’t enough to get me over my utter aversion to horror films. Especially since the trailer managed to shove every single cliche into its mergre two minute running time. Creepy house in the woods? Check. Characters running alone in the dark? Check. An ominous big door that for some idiotic reason is the only entrance in and… You get the idea.

But with very little else to watch in a multiplex stuffed full of your Spider-mans and your Planet of the Apes, I decided to take the plunge and see what, if anything, comes at night. 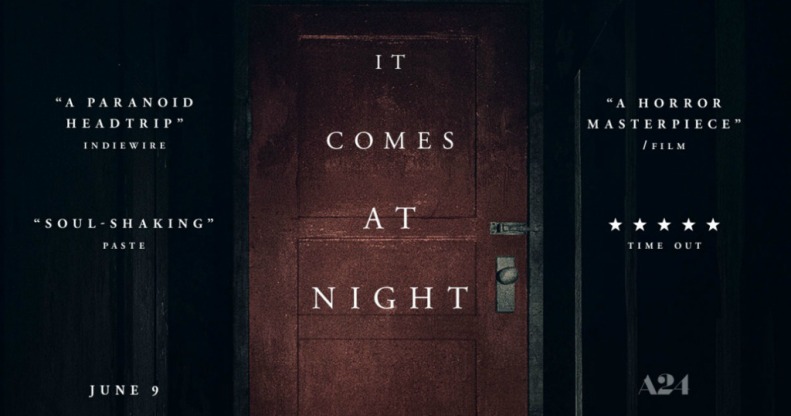 Due to a highly infectious disease seemingly ravaging the world around them, Paul (Joel Edgerton) has barricaded himself into his home in the woods; along with his wife, Sarah (Carmen Ejogo), and son Travis (Kelvin Harrison Jr.)

A stranger (Christopher Abbott) soon comes a-knocking, looking for water in order to provide for his wife and son (Riley Keough & Griffin Robert Faulkner.) Whilst the newcomers are at first welcome, tensions soon start to arise and drastic decisions must be made.

Inspired by writer-director Trey Edward Shults’ experiences after the death of his father, It Comes at Night takes unsettling to a whole new level. From its opening scene of familial suffering, we see father, mother and son try to survive a new post-apocalyptic world filled with pain and loss.

With echoes of John Hillcoat’s The Road, Shult’s direction, accompanied by the cinematography of Drew Daniels, doubles down on the realistic gritty aspect of this world. In the same way that The Road is an exploration of humanity at its lowest ebb, Shults’ film takes a similar path, but in a more claustrophobic manner.

That said, the actual message that this film wishes to convey is somewhat difficult to discern. In similar films, such as Get Out or It Follows, there’s an intricate dissection of both race relations and sexual politics respectively. But in the case of It Comes at Night, that same kind of clarity is never achieved.

However, the absence of any significant explanation is mostly made up by incredibly strong performances across the board. Edgerton in particular shines, taking a radically different tack from his restrained, yet awards worthy performance in The Gift. Though both films are psychological thrillers, here he portrays a man far more quick to anger in the face of desperation; as well as someone willing to go above and beyond in the protection of his family.

Strangely, the biggest problems associated with this picture actually have nothing to do with the film itself. Rather it’s the external factors surrounding the film that will most likely lead to disappointment in some. For example, the title is incredibly misleading. To explain why would reveal too much, but I can imagine that those coming to see what comes at night are going to be leaving rather dejected.

In turn, the decision to market the film as a horror is rather baffling. It Comes At Night is first and foremost a psychological thriller. Yes it’s incredibly disturbing, but that in itself does not make a horror film.

It Comes at Night hasn’t done the impossible and made me reassess my long held prejudices of the horror genre (mostly because it’s not a horror film!) But with its intense and claustrophobic atmosphere seeping into every second of screen time, it’s hard not to be beguiled by its challenging look at human nature in times of crisis.

2 Replies to “Review: It Comes At Night (2017) – A Terrifying Portrayal of Human Paranoia”