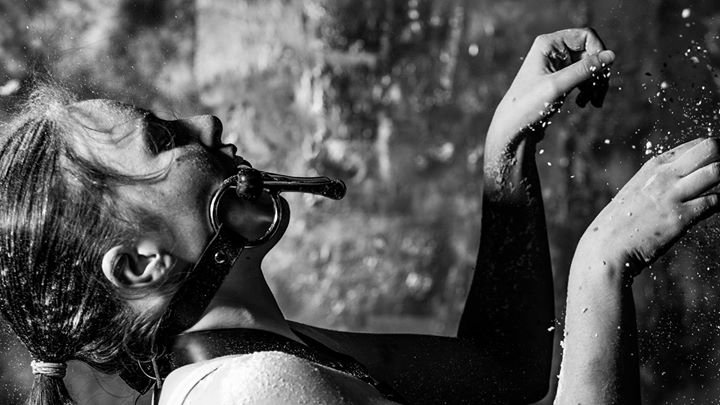 But on the other hand, one single day of public tolerance is hardly indicative of wide scale acceptance. And it’s this aspect that writer-director Simon Moore’s new play, Black Beauty in Irons (BBiI), chooses to delve into. To see whether the desire to live as an animal is something that can be achieved, even in a tolerant 21st century world.

Aidan (Erin Wilson) is a woman with an all-consuming desire. Divulging her secret to her boyfriend Bravo (Sam Treharne), she admits that, since the age of 14, she has fantasied about being treated like a horse in a form of roleplay called ponyplay.

Shunned by most of mainstream society, ponyplay is where participants dress up, act like horses, and are even treated as such by human handlers.

Seeking out a way to realise these desires, they come across Jane (Nicole van Niekerk), a ponyplay trainer. She takes Aidan under her wing and introduces her to the other ponies she trains, Ginger (Katie Clement) and Duke (Marcus Frewin-Ridley.)

At first Aidan and Bravo enjoy revelling in their new found kink. But as Aidan’s desire for more intensifies, it threatens to destroy their entire relationship.

Taking minimalism to a whole new level, BBiI is not a play that dives headfirst into the world of animal roleplay. Instead it chooses to approach the topic with some delicacy, taking the time to establish the main duo and ease the audience gently into the world.

As a newbie to this society, this perspective is strongly appreciated. While it may have been difficult for some to understand Aidan’s desire, Moore’s choice to approach the topic from this angle makes it clear that he intends this play to instruct, as well as entertain.

To further illustrate this is the interesting decision to place a heavy emphasis upon Aiden’s kink-wary boyfriend. Essentially playing the audience surrogate, Treharne’s Bravo helps guide us into this unique world. With his every look and tone of voice, he helps establish the confusion and helplessness that a great many of us might feel if our significant other professed a desire for animal roleplay.

While Wilson plays Aiden as a doe-eyed innocent during the first half, it’s when the lines between reality and fantasy start to blur that her anger begins to seep out. With her spittle almost reaching the backrow, Wilson rages wonderfully at the unfairness of having to be forced into what mainstream society deems “appropriate.”

While her monologues do betray an experience that is slightly unearned, considering her short time on the ponyplay scene; it does not take away from the very real injustices that I imagine many in the kink scene must suffer.

But the most interesting moment is where we as an audience are forced to question the freedom we lack in our own lives. This is portrayed brilliantly with Clement’s Ginger flying into an utter fury, as she laments how she’s stuck in a life that consists of nothing more than an empty house, a commute to work, and unfeeling work colleagues. In that moment, it is made crystal clear that these ponyplay lovers are not too different from ourselves. Yes, the avenue of escape might be different, but that freedom from oppression is something we all savour.

Produced by 2nd Self Ensemble