The number of influential pieces of British literature is almost limitless. Hundreds of stories across the centuries have been studied, disseminated and adapted by millions across the world.

So when I try to think of what could be at the top of that list, it’s almost impossible to make a decision. Some people may argue for the works of Charles Dickens or J.R.R. Tolkein. Or maybe they have a soft spot for the worlds of Harry Potter or Nania.

But for yours truly, nothing beats the influence of the great detective known as Sherlock Holmes.

When you think of the number of derivative works; ranging from TV episodes, movies, paintings, drawings and books, it would easily number in the hundreds of thousands.

But long before any of this, the public’s main appreciation of Sherlock Holmes (outside of the books) was to be on the stage. And the gentleman they would associate most of all was William H. Gillette.

In the same way that the current generation sees Benedict Cumberbatch as their Holmes, and previous generations had Basil Rathbone, Peter Cushing and Jeremy Brett; it can arguably be said that Gillette was the defining Holmes for those in the late 19th/early 20th century.

It is hard to stress just how influential Gillette was, and still is, on the public perception of Sherlock Holmes. It was he that popularised the notion that Holmes would wear a deerstalker hat and smoke from a calabash pipe. Neither of these aspects were a part of the original Conan Doyle books.

His influence did not stop at mere acting, as he was also an accomplished inventor. Essentially the James Cameron of his day in terms of technical achievements; most of his inventions were used to make the theatrical experience far more entertaining, such as fire or sound effects. In fact, according to Wikipedia he had a patent on a device that would…

imitat(e) the sound of a horse or horses approaching, departing, or passing at a gallop, trot, or any other desired gait, the same to be used in producing stage effects in theatrical or other performances or entertainments, exhibitions, etc

Mixing story aspects from A Scandal in Bohemia, A Study in Scarlet and The Final Problem, the play was so well received that Doyle even incorporated a minor character from the play into his later Sherlock Holmes stories! 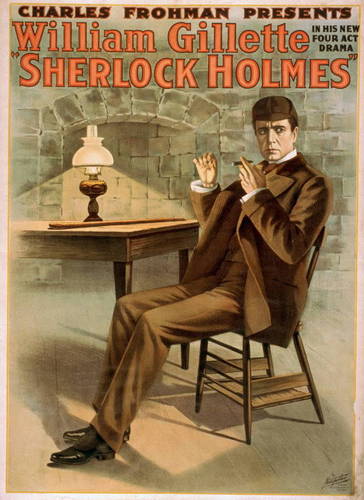 The success of the play meant it ended up being performed, not just in New York, but in London as well. (Fun fact: When the play was performed at London’s Lyceum theatre, the character of Billy the Page was played by a young Charlie Chaplin!)

So being the accomplished man that he was, it was no wonder that Gillette jumped at the chance to put his most popular character onto the big screen.

Alas, like many films of the period, the final product was not properly preserved. Unable to find a copy for over 90 years, this led to the work to being considered one of cinemas “lost films.”

At least until 2014, where it was announced that Cinémathèque Française had found a copy in their archives. Apparently it had been found mislabeled among other Holmes-related media.

Thus, in conjunction with the San Francisco Silent Film Festival, the process to restore the film began. Not only did the film negative need to be cleaned up, but as it only had French subtitles, it needed to translated back into the original English.

After much effort, the film finally premiered to the public in 2015 and was made available to rent on Vimeo in July 2016. It is now considered the earliest surviving film about the character of Sherlock Holmes.

Brought to life by noted stage director, Arthur Berthelet; the film itself is obviously silent, with only the occasional English intertitle, and accompanying music that would have undoubtedly been played by an orchestra back in 1916.

It’s actually quite easy to see why Gillette was such a popular character on stage, as he absolutely owns the character on film. He strides around the room, confident and assured when facing off against the more villainous characters. But he also offers a touch of humanity when conversing with Dr. Watson (Edward Fielding) or his love interest, Alice Faulkner (Marjorie Kay.)

Even technically the film is impressive. Obviously it doesn’t quite hold a candle to today’s Hollywood, but thanks to the incredible work done in the restoration, the detail and image quality is strong throughout the film. Even the decision to stick with the original colour-tinting; a sepia tone for the interior scenes and a dark blue for the exterior ones, makes the film far more visually engaging than you might expect.

In addition, there are extensive uses of panning shots, fight scenes and explosive effects. If anything, I’m still amazed as to how they achieved so many outdoor shots without the world’s longest extension cord!

The story is a little more haphazard though, most likely from its mix of several different Holmes stories. But essentially it boils down to young Alice Faulkner being in possession of several love letters, exchanged between her-now dead sister and the Crown prince. (As my friend once mentioned, it was essentially the sex-tape of the 1900s!)

But Alice is being held hostage by James and Madge Larrabee (Mario Majeroni & Grace Reals); two crooks who want the letters in order to blackmail the prince. Holmes is then hired to retrieve these letter by Count von Stalburg, the prince’s assistant.

In addition to the haphazard nature of the story, there are also leaps of logic that make the Grand Canyon look like the size of a golf hole! For example, one of the titlecards merely dictates a description of a man, and yet somehow they immediately know it’s Holmes! 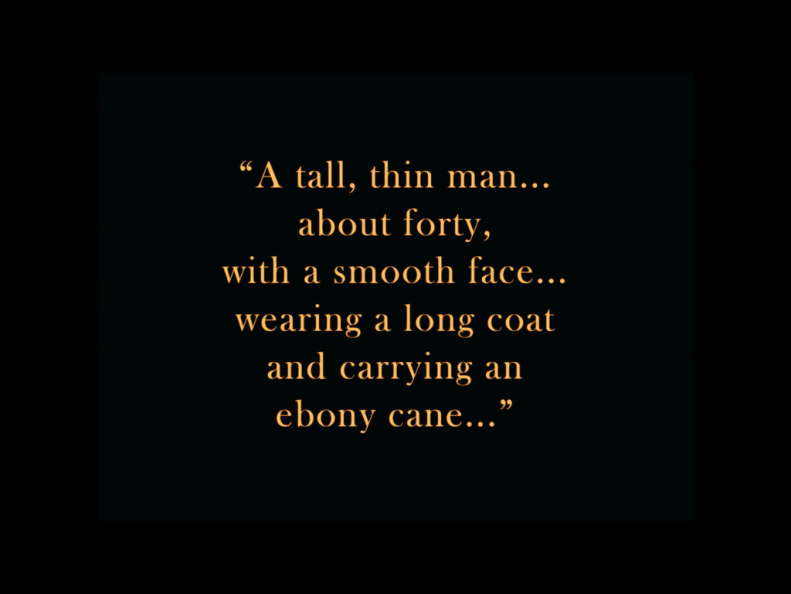 You eventually start to wonder how these blackmailers could be so stupid as to come to the decision that holding a woman hostage is preferable to just breaking into her house. And the only way this film’s incarnation of Professor Moriarty could be considered a genius is if everyone’s else’s IQ suddenly dropped 20 points. (Case in point, his brilliant plan to rid the world of Sherlock Holmes is to walk into 221B Baker Street and… Shoot him?)

But minor issues aside, Sherlock Holmes is a delightful gem from the turn of the century. While I am under no delusion that everyone reading this article would enjoy the film, there’s no doubt that an important piece of cinematic history is present within its 116 minute running time.