Though I’ve lost count of the number of films released that explore human emotions through memory, 2017 has not been a particularly good year for them.

Early on in January we got the big budget adaptation of popular videogame franchise, Assassin’s Creed; while later on was the release of the Peter Dinkledge-starring Rememory. While one was slightly better than the other, the fact that both made the average Dan Brown novel look realistic is saying something.

But in spite of its indie origins, I’m Not Here easily made my list of most anticipated films of 2017 back in January. Mostly for the Oscar winning acting of J.K. Simmons. As I said in that article:

One of the best actors of our generation, J.K Simmons has made an incredible career for himself as one of Hollywood’s most foremost character actors. It’s a shame he doesn’t have more leading roles, but 2017’s I’m Not Here seems to rectify this injustice.

And when I found out the World Premiere would be taking place in London less than 3 minutes walk from my place of work?

You’re god damn right I snapped up a ticket!

Even though it’s his 60th birthday, Steve (J.K. Simmons) has confined himself to his home. The tragedies of his past have emotionally overwhelmed him, and he spends his days wallowing in alcohol and the silence of his unkempt home. With numerous mementos and titbits scattered around him, he reflects on the memories that have brought him to this point.

We flashback to his time as a child in the swinging 60s (Iain Armitage, who will soon be seen as the lead in the upcoming sitcom Young Sheldon); where the difficulties of his parents marriage (Mandy Moore and Max Greenfield) sets him down the wrong path.

Accompanying this we see him in the 80s/90s as a middle-aged adult (Sebastian Stan); and witness how the lessons and pain of the past shapes the relationship with his wife, Karen (Maika Monroe).

Bouncing back and forth between all three time periods, it is revealed how decisions and actions, both big and small, have brought Steve to the low point he finds himself in the present day.

The second film from writer/director Michelle Schumacher (and co-written with Tony Cummings), I’m Not Here kicks off by showing its lead character weeping while holding a gun to his temple. Clearly it’s not pulling any punches when it comes to the depiction of both depression and alcoholism.

Fortunately said scenes (and there are many!) are handled deftly, not only by the steady directorial hand of Schumacher; but also by a grounded performance from Simmons. With a body so gaunt it makes Christian Bale in The Machinist look healthy; Simmons makes the role his own, showing us a side of him that he doesn’t often get to display. Whilst most people will be far more familiar with the bombastic performances he gives in Whiplash and Sam Rami’s Spiderman trilogy; here Simmons brings pathos and sorrow with only the simplest of glances. It’s all the more impressive considering he literally has no lines and never once interacts with another member of the cast.

Said cast are all recognisable faces, ranging from the big blockbuster actors of Stan and Monroe, to the long-term stalwarts of Moore and Greenfield, and even Harold Perrineau (of Lost fame) in a short but sweet role as a recovering alcoholic. That said, the newcomers of Iain Armitage and Jeremy Maguire (both under the age of 10) are an utter delight to watch. In such a gloomy film their performances bring a much needed sense of levity. Full props to casting directors, Riva Cahn Thompson and Mary Vernieu. 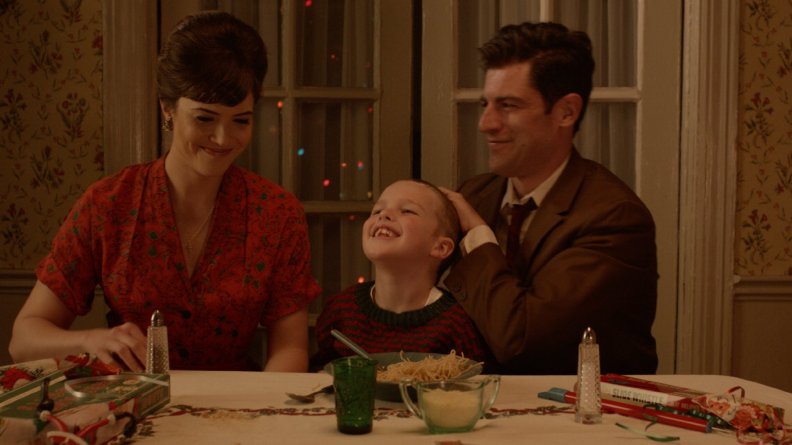 A special shout-out must also be given to Emily Beihold, composer and singer of the two songs “Child of the Moon” and “Not Who We Were”; both of them beautiful pieces of music. (Though neither have been publicly released, a previous song, Shoot Her Down, is a song that is just as memorable.) (EDIT: Turns out they are both available on iTunes, but under her stage name of Em.)

There are, however, minor issues that permeate the writing of the piece. One example being the writers vastly overestimated the comedic value that could be mined from the quantum mechanical theory of Schrödinger’s cat! (Trust me, it’ll make sense when you watch the movie!)

But a bigger issue is the lack of development for some of the supporting characters. The relatively short running time means most of the attention is spent on Steve; and because of this characters such as Karen are left slightly by the wayside. We find out very little (if anything) about her own hopes or dreams, leaving her character only a step above the traditionally unloving wife. That said, it’s nowhere near as empty as the character of Adam (David Wexler), Steve’s best friend; who in his three biggest scenes, seems to only be in two of them because he happens to have a penis!

While a little iffy on the character development for the supporting cast, I’m Not Here is nonetheless a harrowing exploration of not only how the sins of the father can affect the son, but also how sometimes our vices and flaws can’t be overcome, no matter how noble our desires might be. With great performances and strong direction across the board, I’m Not Here can easily stand alongside the other big budget dramas of 2017.

I’m Not Here currently has no U.K. distributor, but fingers crossed it will be picked up for release in the near future.