Controversial opinion time! (as if there’s any other on the internet!)

While it may go against general consensus, I don’t believe the original 1982 Blade Runner is a particularly good film. Even with my preference for wordy science fiction (á la Star Trek rather than Star Wars), Blade Runner nonetheless felt overlong, plodding and didn’t really make a lot of sense in spite of its incredible special effects and cinematography.

Whilst I’m sure the return of Harrison Ford to the Blade Runner universe is what caused most original fans to give this film a chance; I myself was actually intrigued by Ryan Gosling’s decision to board the franchise.

Gosling has never been one to surround himself with the trappings of big budget cinema. Even relatively large-scale La La Land ($30 million) is still pretty small compared to the average Hollywood blockbuster. In fact, if you look at his filmography, his most expensive film was “only” $76 million for 2011’s The Ides of March.

So for Gosling to lead a movie that, at somewhere between $155 -$185 million, is nearly triple what he’s previously done, there must have been something pretty engaging in that script to get him on board. 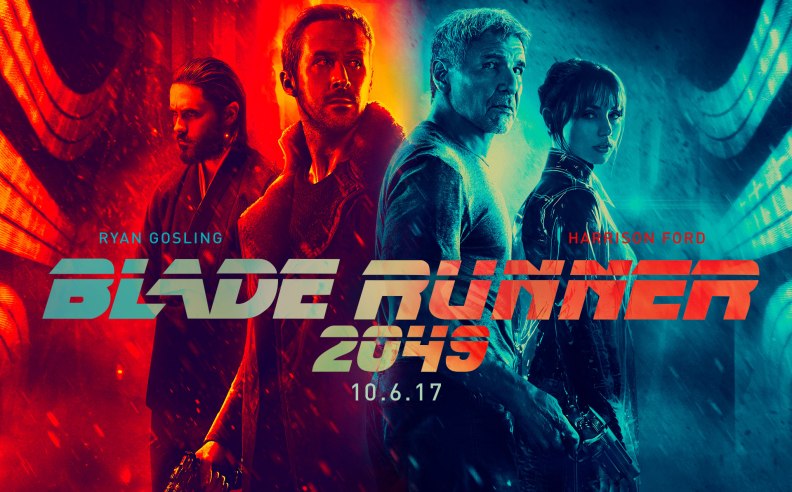 The year is 2049 and Police Officer K (Ryan Gosling) is on the hunt for rogue robotic humanoids known as replicants. After terminating an especially tough opponent, he discovers the remains of a replicant buried underground.

Scientific analysis reveals that this specific replicant died in childbirth; a process that was previously thought impossible. Fearing that a violent conflict may arise if this information was ever made public, Lieutenant Joshi (Robin Wright) orders K to find this child and terminate it.

However, threatening to derail his investigation is the CEO of the Wallace Corperation, Niander Wallace (Jared Leto). Desperate to discover the secrets to replicant reproduction, he sends his devoted assistant, Luv (Sylvia Hoe), to stop K by any means necessary.

I’m going to let you people in on a little theatrical secret. If you ever hear a theatre worker or theatre celebrity complement a play’s set design, and ONLY the set design, it means that the play in question has close to zero redeeming qualities.

Blade Runner 2049 has an incredible set/production design, rivalling some of the greats of science-fiction cinema. Star Wars, Tron, The Fifth Element, and yes, even the original Blade Runner. All films that have influenced science-fiction designs for decades, and all of which Denis Villeneuve’s newest film pays homage to. From the titanic stone gods littering the abandoned streets of Las Vegas; to the vast neon-infused metropolis of Los Angeles; it truly feels like a lived-in world with secrets just waiting to be discovered.

The design shines even further when taking into account the incredible work of cinematographer Roger Deakins. It’s hard to believe that his work on Sicario could be rivalled; and yet he comes close. The urban nightlife, an orange-hue desert, a cold and lifeless countryside. Deakins seems able to adapt any environment and brings a sense of visual complexity that is guaranteed to win him plenty of plaudits come awards season.

Alas, we no longer live in a world where a movie can skirt by with nothing more than impressive visual treats. To be fair, the film does start with a sense of intrigue, setting the scene for a mystery that has the potential to blow the story wide open. And yet the plodding nature of the piece makes you wish that a solid editor had taken a chuck out of its 164 minute running time. Sorry Villeneuve, but holding on a beautiful shot for a solid 15 seconds doesn’t automatically make it “artistic!”

As a result that lack of attention for the story and character starts to bleed through to the film’s surface. Everything feels like it’s been done before. And done far better. For example, for a large portion of the movie K finds himself accompanied by what can only be called a holographic girlfriend by the name of Joi (Ana de Armas). These sections of the film, while helping to expand on K’s emotional state, are increasing reminiscent of Spike Jones’ far more impressive Her. Other “thoughtful” and “deep” ideas; like whether machines have souls, have been done to death in other media. As such, the movie eventually grinds to a halt, demanding more and more of your time in exchange for nothing but pretty pictures.

This is illustrated best by an utterly superfluous technology-based sex scene. While it’s understandable the goal was to demonstrate K’s ascension into manhood, the entire scene is so lifeless it feels like Villeneuve decided to pull a “George Lucas”. In other words, directing a scene to suggest that fellating the tower of modern technology is more impressive than having a human connection.

Over the years there have been many truly amazing pieces of “slow-burn” sci-fi. Contact, Moon, Ex Machina, hell, even Villeneuve’s own Arrival.

And yet Blade Runner 2049 doesn’t come close to those greats. It doesn’t even come close to the good. It’s been 30 years, but my opinion of this big budget sequel isn’t too different to its predecessor: overlong, plodding and doesn’t really make a lot of sense in spite of its incredible special effects and cinematography.