Screaming out from its blood red poster, Father of Lies states that their show is a cross between Making a Murderer and Rosemary’s Baby.

Confident words. Words that would suggest a story filled with darkness and tragedy. But can the newest play from Bete Noir Productions actually meet such lofty claims? Together Sasha Roberts and Tom Worsley act as our guide as they delve into a mystery. An unsolved murder that took place on the outskirts of a snow-covered town called Würzburg.

With photographs, police reports and other pieces of meticulous research, the two men take us on a journey. A journey that twists and turns through a story filled with religion, cults, politics, betrayal and a miracle.

With the darkness cut through by nothing more than the flickering light of an old fashioned slide projector, Father of Lies sets the scene immediately as soon as you enter the auditorium.

Essentially a crossover between a theatrical performance and a lecture; the play starts gently, with Roberts and Worsley taking the time to introduce themselves and their intentions. It’s a friendly opening, with both actors coming across as very likable.

It’s also a fairly interesting approach to a live performance, and one that feels unique as audience interaction traditionally tends to be restricted to comedy. Fortunately said interaction brings a sense of intimacy to the proceeds; especially when Worsley recites a heartfelt experience about his long departed mother.

But soon the comfort disappears and we’re taken into the true story of Father Anselm Neumann; a widowed priest who could be responsible for one of Germany’s most mysterious murders. 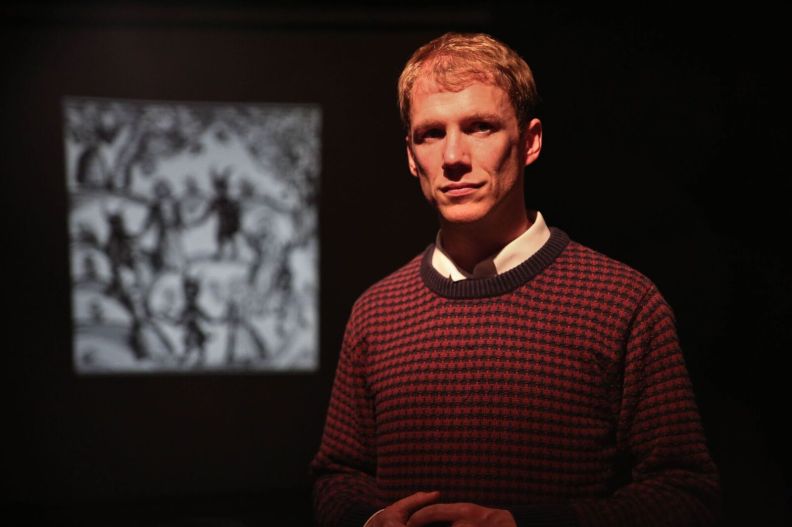 It would be far too revealing to go into more details, but the journey is undoubtedly an engaging one. With 12 months of research behind them, Roberts and Worsley expertly drip-feed each piece of evidence. Each new clue merely a small part of the jigsaw as they build upon a canvas that spans 4000 miles across decades of history.

But it’s not all talking at the audience as the duo also add in several dramatic reenactments. While fairly simplistic, with only a few props to boot, such an approach strongly elevates the material as it gives us a chance to witness conversations that result in a much greater insight into the main players of this mystery.

But while the intense journey to the climax is captivating, there is a small desire to stop and learn a little more about the smaller aspects; such as the cult known as The Alder King, or more information about those who had to solider on in the aftermath of this terrible crime.

If anything there was a sense that the entire performance could have acted as the first half of a traditional length play. With a gasp-inducing cliffhanger already in place, it would have been most intriguing for an added second half to maybe explore potential answers to this 40 year mystery.

Regardless of its lack of resolution, Father of Lies is an astounding piece of theatre.

In only 50 minutes, Roberts and Worsley show us a story that dives to the heart of the human condition. How sometimes a comforting fiction is more preferable to a devastating truth.

In the end, Father of Lies it is a grand example of how, even after centuries of live performances, there are still ways to breathe new life into theatrical story-telling.

Father of Lies was performed as part of the London Horror Festival 2017. The play will next be performed at the 2018 Vault Festival from 28th Feb – 3rd March at 7:30pm.

Written, directed and performed by Sasha Roberts and Tom Worsley