“Astounding bad in almost every way” – The Wrap

“It’s the opposite of must see” – Collider

Now I understand mainstream media is prone to exaggeration, but Christ almighty! The response to Bright, Netflix’s new $90 million blockbuster, has been brutal!

And like the recently released Star Wars film, The Last Jedi, there also seems to be a massive disconnect between audience and critic responses. In the case of the long-running sci-fi franchise, critics fawned over it. But the Rotten Tomatoes audience score of 52% (off 150,000 reviews) showed that the feelings weren’t mutual.

But the exactly opposite seems to have happened to Bright. While roundly rejected by critics, an audience score of 89% (though off only 10,000 reviews) would suggest that the masses are taking a far brighter shine (ha!) to this unique entry in the fantasy genre.

So who’s correct? The critics or the general public?

Set in a world where humans, elves and orcs live in uneasy co-existence, L.A. police cop Daryl Ward (Will Smith) is about to go back on duty, having been bed-ridden for months due to a gang shooting.

On his first day back he re-teams with his partner, Nick Jakoby (Joel Edgerton), the city’s only orc police officer. Widely considered to be a “diversity” hire, Jakoby struggles to prove himself due to human’s historical hatred of his kind.

One night Ward and Jakoby respond to a household disturbance; but instead find the remains of several bodies and Tikka (Lucy Fry), a young elf woman who’s in possession of an extremely powerful object: a magic wand.

Now on the run, Ward, Jakoby and Tikka must try to survive the night as they are hunted down by corrupt cops, law enforcement, local power-hungry gangs, and the wand’s original elf owner, Leilah (Noomi Rapace).

“Inventive” is probably the single best word to describe what Bright is. Blending the gang-infested streets of L.A. with the more fantastical elements of flying dragons, magic wands and evil dark lords must have been quite the challenge. As such, points must be given to writer Max Landis and director David Ayer for what they have tried to bring to life.

“Tried” however, is the operative word as the movie seems to bounce quite rapidly between failure and success. On the one hand, the first hour is a masterclass in world creation. We see the lives of upper class elves intertwining with the downtrodden orcs, while humans fill out most of the jobs in-between.

Yes, it can occasionally get complex, but hey, so was Inception. In fact, it’s hard not to be reminded of District 9 when watching Bright’s presentation of an oppressed species trying to eke out a meagre living while under the yoke of human persecution.

It also quickly becomes obvious why Ayer was selected for this project, as the gritty streetwise sensibility harkens back to his previous L.A. cop dramas of Training Day and End of Watch. But the camera’s never as intimate as those previous projects, leading to a sense of detachment as we watch Ward and Jakoby try to survive on the mean streets. If anything, there’s an impression that the documentary method in the aforementioned District 9 might have worked really well if applied to Bright. Maybe this would be a decent approach for Bright 2? (which Netflix have apparently already greenlit!) 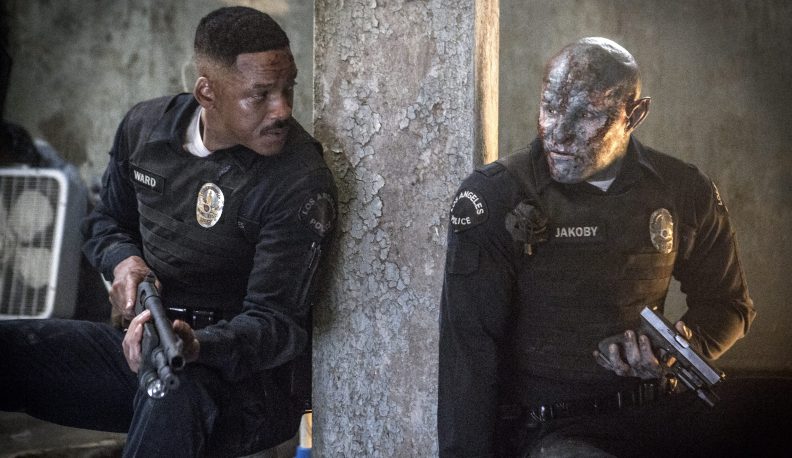 Fortunately the emotional emphasis with the lead duo’s struggle is kept mostly intact, partly due to a decent performance from Smith. He’s not as bubbly as his Fresh Prince or Men in Black persona, but there’s a heart to his desire to try and do good in an otherwise corrupt world.

But it’s Edgerton in his role as the outsider that truly stands out. Completely unrecognisable under his layers of orc prosthetics, he nonetheless is the most relatable figure, even in a world full of humans. It’s actually quite reminiscent of Andy Serkis’ performance from the recent Planet of the Apes trilogy. While Serkis had the safety net of a digital performance, Edgerton has nothing more than his craft. And yet though the layers of make-up he still creates a loyal and brave figure for viewers to root for.

But, as mentioned earlier, all of this is relegated to the first half. Come the 60 minute mark, the film dissolves into an extended midnight chase through the underbelly of L.A. It’s here that rhyme or reason disappears, instead giving way to explosions, gunfights, strip-clubs, Latino gangbangers and every other cliche you can think of.

Indeed, it’s here where the film, for some reason seems to lose interest in its own fantasy setting. Apart from the magic wand, almost every other aspect of the fantasy world either recedes into the background or is vastly underdeveloped. Even Rapace, who as the closest thing the film has to a primary antagonist, is so under-cooked that every viewer runs the risk of catastrophic food poisoning. She might as well have a tattoo on her forehead that says “bad guy!”

Is Bright the worst movie of 2017? No, of course not. In a year that saw the release of the sixth Resident Evil, a third Despicable Me, and whatever number Transformers movie we’re on, Bright doesn’t even crack the top 100 worst films of the year.

In fact, with two great leads and a unique approach in a world full of rehashed ideas, Bright has a lot to offer. It’s only a shame it can’t keep up the originality for its entire running time.

One Reply to “Review: Bright (2017) – Is The Most Expensive Netflix Movie Really Its Worst?”