While you may not have heard of the official term, the underlying concept of “Twin Films” is probably something you’ve heard of. Generally speaking, it refers to two movies with very similar concepts or topics released around the same time, usually within 12 months of each other.

The most notable one in 2017 was undoubtedly Girls Trip and Rough Night; both films about a group of young ladies throwing caution to the wind and finding themselves in all sorts of trouble. But, for the first time in my life, the past 12 months have had what could only be called “Quadruple Films”. Four films that all explore or are based around the evacuation of Dunkirk:

As such, I can’t help feeling a little fatigued with the topic. Even with the focus on (the almost unrecognisable) Gary Oldman as Winston Churchill, is there really anything new left to say?

The year is 1940 and the German war machine is marching through Europe.

With the British opposition Labour party losing faith in his leadership, Prime Minister Neville Chamberlain (Ronald Pickup) is forced to resign for the greater good. His replacement? Winston Churchill (Gary Oldman), an unlikable figure who is viewed with great suspicion due to his failures during the Gallipoli Campaign back in World War One.

Churchill takes to the task with gusto, supported by his wife, Clementine (Kristin Scott-Thomas), and his new secretary, Elizabeth (Lily James). But a divide between himself and the remainder of his cabinet arises almost immediately. Most of his colleagues, led by Foreign Secretary Halifax (Stephen Dillane), feel that Britain’s only recourse is to agree to peace terms with Hitler. But Churchill won’t hear of it, feeling that the Nazi dictator is too dangerous to trust.

Complicating his political woes is the problem of 400,000 British soldiers trapped in Northern France, with no way of escape from the on-coming Nazi horde. And so, Churchill is forced to face his greatest challenge in his attempt to try and save a nation.

There’s a fine line when it comes to playing well-known historical characters. If you go too far, it feels like a caricature. But don’t go far enough and you look like a shitty actor. Trying to bring an original approach to the familiar must be amongst the more difficult challenges for an actor.

And yet, to say that Gary Oldman destroys every interpretation before him would still be one of the biggest understatements of the year. Like Daniel Day Lewis as Abraham Lincoln or Helen Mirren as Queen Elizabeth II, the merging of actor and character seems so perfect as to be defining for a generation.

Though buried under layers of prosthetics (for which make-up artist Kazuhiro Tsuji needs to win every award on the planet), Oldman blusters and rages with pomposity and confidence. But even with all that thunder, there is still a sense of nuance. Especially in the scene where Churchill takes some time to interact with members of the public. Though patently unrealistic, it is nonetheless a lovely scene that shows the grand leader’s inner humanity. 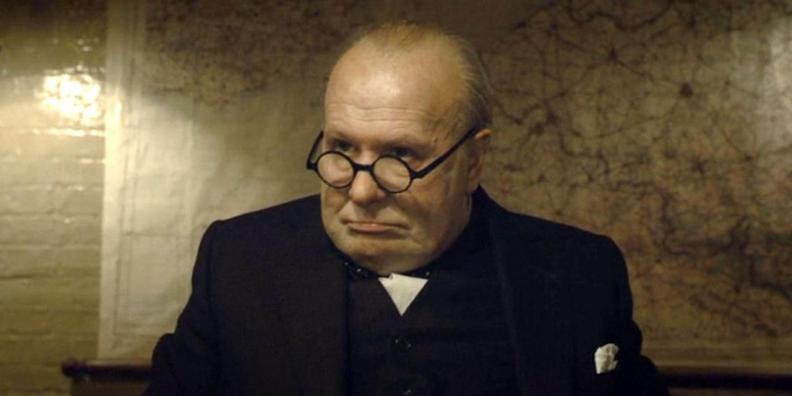 But therein lies a single problem. With such an intense focus on the lead character, almost no time is left to the goals or desires of several of the supporting roles. This is most apparent in both the main female characters. While well played by James and Scott-Thomas, their existence is purely in relation to the main man, rather than as their own developed characters.

In fact, it’s hard not to compare Darkest Hour to 2011’s The Iron Lady; i.e. a fabulous central performance with lackluster surroundings. Part of this could be put down to Anthony McCarten’s screenplay. While well-structured, its theatrical nature is ill-suited to the big screen. With most scenes set in parliamentary rooms and tight underground bunkers, such restrictions also make it difficult for cinematographer Bruno Delbonnel to do anything interesting with his camera.

But with lack of movement comes an increased (and much needed) reliance on music. Fortunately composer Dario Marianelli is on top form here, bringing the sweeping historical pieces previously heard in Anna Karenina, and effortlessly mixing them with the more intimate tension-filled melodies heard in V for Vendetta.

While I admittedly haven’t seen Phantom Thread; it’s more or less assured the Oscar for Best Actor is Oldman’s for the taking. And it is well deserved, being that no other male biopic performance this year can quite hold a candle to his bombastic approach.

It’s just a shame various other aspects of the film don’t quite reach the same towering heights. In fact, this might be the first film I’ve knocked down a peg because it’s a script / story that clearly would have been better told upon the stage rather than the silver screen.