[Spoilers for Lord of the Rings, Back to the Future Part II, Empire Strikes Back, and all prior movies in the MCU]

Do you know why Back to the Future Part II has a better cliffhanger ending than Empire Strikes Back?

Okay, that might be a weird way to open up a review for Avengers: Infinity War, the 19th film in Marvel’s seemingly endless cinematic universe. But let’s cast our minds back to 2014, a time when the most concerning thing that the American President had done was wear a tan suit.

At a specially arranged fan event, Marvel proceeded to lift the lid on their entire line-up for Phase 3, including the reveal that there would be a two-part adaptation of the Infinity Gauntlet storyline; the first in May 2018, and the (now currently untitled) sequel following a year later.

On hearing this there were a lot of issues that made me wonder if Marvel could actually pull off a movie of this scale. But, one by one, the movies of Phase 3 put my mind at rest. Captain America: Civil War showed that it was possible to tell an engaging story with an above average sized cast. Doctor Strange made it clear that Marvel could be bold when it came to even the weirdest of worlds. Thor: Ragnarok proved that Marvel weren’t afraid to make major permanent changes to their universe. And movies like Guardians of the Galaxy Vol. 2, Spider-Man: Homecoming and Black Panther indicated that Marvel could create astounding villains when they put their mind to it.

This left one final concern: how would Marvel end Infinity War?

Being that Infinity War was originally part one of a two-part story, it was kind of a given that a cliffhanger ending would be on the cards. But what type of cliffhanger would it be?

Take Back to the Future Part II for example. BTTF 2 was careful to conclude the major story of the film’s second half, i.e. finding and destroying the Almanac. Once that happens, for all intents and purposes, the main plot for BTTF 2 is concluded. The remaining five minutes or so are just a setup for BTTF 3. Put simply, the audience are given emotional closure before being presented with a small added plot point that acts as a cliffhanger for the final movie.

But Empire Strikes Back pissed in the audience’s faces, leaving them emotionally unfulfilled by its refusal to finish the main story. The audience (who in real life waited three years) have to then waste the first 20 minutes of Return of the Jedi finishing a plotline that should have concluded years earlier.

My point, in this otherwise long-winded and self-indulgent pivot, is that the type of cliffhanger Marvel chooses can make or break what would otherwise be a great movie. In other words: has Marvel delivered a complete and coherent experience, as they have for all of their previous 18 films? Or has their magnum opus ended on nothing but irritation and annoyance?

Two years after the events of Captain America: Civil War, the superhero team known as the Avengers have become almost a distant dream. But their skills are needed once more as Thanos (Josh Brolin), a brutal despot, wishes to rid the universe of half its population.

To do so he attempts to collect the Infinity Stones, a collection of six powerful gems that allow the holder mastery over the minds and souls of living creatures, as well as the metaphysical aspects of Time, Space, Reality and Power.

Standing alongside him are his four children, Cull Obsidan (Terry Notary), Proxima Midnight (Carrie Coon), Corvas Glaive (Michael James Shaw) and Ebony Maw (Tom Vaughan-Lawlor). Collectively his children are known as the Black Order, and along with their father, they launch a multi-pronged attack against the various owners of the Infinity Stones.

See that synopsis above? That represents the single greatest move by the Infinity War team: making Thanos the protagonist. It must have been so temping to take the easy path and instead make someone like Iron-Man (Robert Downey Jr.) or Captain America (Chris Evans) the star (and to be fair, the pair do function as strong supporting leads.)

But this is very much Thanos’ story through and through. Credit must be given to veteran MCU writers, Christopher Markus and Stephen McFeely, for their stroke of genius. Because of their choice we get to see Thanos struggle for a cause he believes in, witness the setbacks, the sacrifices and the pain of his journey. Indeed, like all the greatest villains, he believes he’s the hero and what he does, he does for the greater good.

Much of that is down to Brolin’s performance as The Mad Titan. It takes a special kind of acting to make us emphasise with a genocidal manic, but goddamn, he pulls it off. It’s all the more impressive as his performance is entirely through motion-capture. 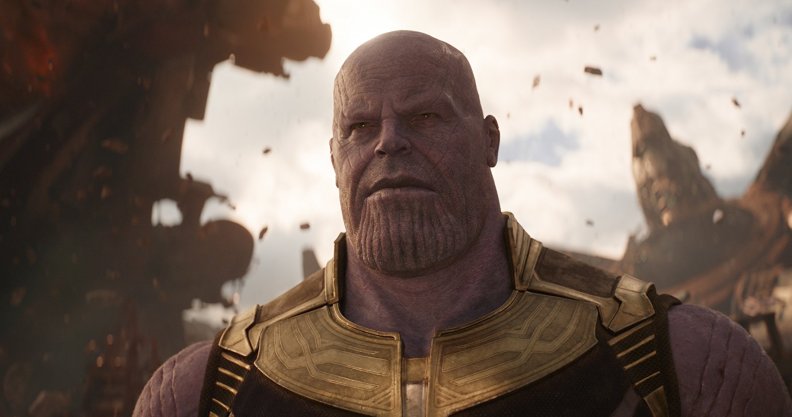 Due to this decision to essentially tell the story from the villain’s point of view, there’s a drastically different tone that permeates throughout, at least when compared to the average Marvel movie. The most obvious being that Infinity War is easily the darkest of all Marvel’s output. I never thought I’d see the day where a film aimed at children would focus on multiple acts of genocide, but here we are.

As such, this willingness to embrace the darkness helps dispel one of the biggest criticisms of the MCU: the lack of true death. Well criticise no longer mere mortals because, Christ almighty, death has come and it is here to stay. (Eat your heart out Deathly Hallows!) To say more would obviously be a spoiler. Let’s just say that the chances of certain beloved characters seeing Phase 4 is next to zero.

But do not fear, Marvel haven’t just made Schindler’s List. There are still jokes aplenty. Indeed one of the most joyful aspects of the movie is watching characters that have never met before interact with each other. As such seeing Iron-Man verbally spar with Doctor Strange (Benedict Cumberbatch); Black Widow (Scarlett Johansson) fighting back to back with Okoye (Danai Gurira); or even Thor (Chris Hemsworth) sharing a moment with Groot (Vin Diseal) and Rocket Raccoon (Bradley Cooper) make up some of the most thrilling moments of the movie.

Speaking of Thor, while the film has to juggle numerous storylines, it dedicates a surprisingly large amount of time to the God of Thunder. Considering we just had a two hour movie all about him less than six months ago, it’s a strange choice, but a welcome one. In a universe that is slowly approaching its endgame, Marvel takes a moment to make us realise just how much Thor has lost over the past few years compared to his Avengers brethren. The deaths of his mother, father and sister; the murder of his best friends; the loss of his lover, his kingdom and his home. It all whirls together in a scene that Hemsworth pulls off with aplomb.

References to Thor’s past are just some of the numerous callbacks and allusions to events of old. If you’re hoping for an easy introduction to the Marvel Universe, this is not the film for you. From the opening scene, directors Anthony and Joe Russo hit the ground running and woe be you if you can’t remember a variety of details and individuals from across the past 18 movies. As a matter of fact the biggest criticism is, unlike Civil War, the cast list is so overwhelming that even a few fan favourites feel somewhat extraneous and end up having nowhere near the same impact as previous films.

Still, as mentioned in the introduction, my biggest concern is that of the ending. And I must say… I am impressed!

Yes it’s true, there is no avoiding the fact that this is half a movie. But it’s not an unfinished movie. If anything the ending brings to mind Peter Jackson’s work in the first two Lord of the Rings movies. While the journey of the One Ring was yet to be concluded in Fellowship of the Ring and The Two Towers, Jackson and his cohorts made sure that each film ended with a sense of closure. Infinity War does much the same, leaving a few threads open for a sequel, but fundamentally bringing the story of Thanos and the Infinity Stones to an end.

There is no disputing the groundbreaking nature of Avengers: Infinity War. Dozens of characters from nine different franchises being brought together into the single biggest story ever committed to celluloid.

And the way that story is told is equally groundbreaking. While clad in the guise of a superhero film, Infinity War tells its tale in a way never before seen on the big screen, and likely will never be seen again.

All images © Marvel Studios 2018 via IMDb