Though Amy Schumer’s last film, Snatched, wasn’t quite up to par, I Feel Pretty is a return to the Trainwreck mold. In essence, a down-on-her-luck woman trying to make a change for the better. But it’s safe to say that Schumer’s third starring feature also isn’t a hugely original concept. Bridget Jones Diary, The Nutty Professor and Shallow Hal are just a few of the numerous examples of films that deal with people coming to terms with body shapes that aren’t perfect.

And to be fair, it does stand apart from those previously mentioned comedies. But only in the sense that it is so, so, so much worse. 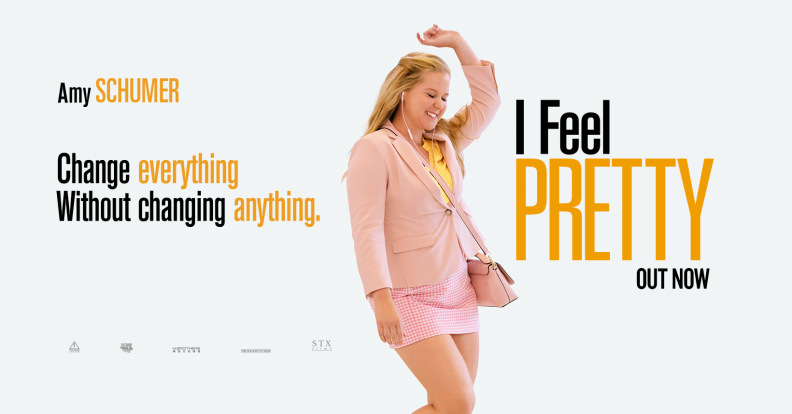 Renee Bennett (Amy Schumer) is a young woman who struggles with feelings of insecurity over her appearance. Though she tries to overcome them with her best friends, Vivian and Jane (Aidy Bryant and Busy Philipps), the crushing pressure of societal expectations threatens to completely destroy her.

At least until she takes an unfortunate hit to the head while at an indoor cycle class. Upon waking, Renee somehow perceives herself as a much more attractive woman compared to what she was earlier; thus helping her to gain a massive boost in confidence.

With such overwhelming positiveness, Renee starts to move up in the world, getting a brand new job, rocking some new clothes and even getting a boyfriend (Rory Scovel). But how long can this self-delusion last?

One of the fundamentals of any film is that the first 10 or so minutes needs to set the general tone and direction. For example, A New Hope opens with a space battle. Jaws opens with the memorable devouring of an innocent. The Sound of Music opens with both sound and music. You get the idea?

But the opening moments of I Feel Pretty are so devoid of laughs that it’s impossible to ever think that what is about to follow could be a comedy. Though the lack of hilarity is bad enough, I Feel Pretty is so much worse because the opening of the film is actively depressing. You’re essentially forced to watch a young lady being brought to the edge of tears as she realises how pathetic her life is. Hell, the first 10 minutes of Schindler’s List ends up being more fun in comparison. (I’m not exaggerating, I literally re-watched the first 10 minutes of Schindler’s List just to make sure.)

Of course, taken as a whole, I Feel Pretty is nowhere near as depressing as that Oscar-winning film. But the absence of laughter in the beginning basically sets the scene for most of the film. I Feel Pretty is not the comedic journey of a woman coming to terms with the way she looks. Rather it’s the voyage of someone who, at various moments, is either utterly depressed or utterly deluded as she navigates a kafkaesque nightmare while surrounded by the most shallow and superficial people imaginable.

Don’t get me wrong, being a man I can’t speak as to how realistic these interactions are. It’s entirely possible that a lot of the things that Renee encounters do reflect women’s experiences in real life. But when you see a complete stranger assuming they’re in the wrong building purely because they don’t see a stick-thin model behind the receptionist desk, it’s hard to accept that anything in this film comes close to what real women have to suffer.

Indeed, there’s a little bit of me that wonders if a more dramatic approach would have fared better considering the subject matter. The film’s underlying concept hews quite closely to 2007’s Lars and the Real Girl. Perhaps I Feel Pretty could have been a great chance to explore and delve into a young woman’s psychological situation, but still possess a comedic touch?

Having said all that though (and it’s pretty one-sided, I know); the film isn’t completely without comedy. The numerous reaction scenes whenever Renee declares her beauty to the world do elicit a decent chuckle. But the film’s saving grace is undoubtedly Michelle Williams as Renee’s boss, Avery LeClaire. Unlike Schumer, Williams isn’t a natural comedian, but she throws herself into the role with gusto. She’s clearly having a lot of fun playing the squeaky-voiced businesswoman trying to be taken seriously; and every scene without her is a lesser one. It’s just a shame that the highlight of Williams isn’t enough to bolster the overall product.

There are many ways a comedy can let you down. Unfunny jokes. Terrible acting. Maybe even offensive stereotyping. But I Feel Pretty did the unthinkable.

It made me feel sad.