While some of my past reviews have touched upon the idea that Arnold Schwarzenegger’s dramatic work is vastly underrated, the same could also be said for his more comedic roles. Despite the overwhelming negative response from the action-loving crowd, I personally have quite the soft spot for movies like Kindergarten Cop and Jingle All The Way. Yes, they might not be the best of the Schwarzenegger filmography, but I’ve always found them to be good movies that tickle my funny bone.

Killing Gunther tries its best to do the same. It isn’t as family friendly or as funny as the aforementioned films, instead hewing closer to entries like Last Action Hero. But there’s a decent enough idea at its core to make it a barely passable 90 minute romp through the world of assassins.

Blake (Taran Killam) has a dream. To become the greatest, most feared assassin the world has ever known. And the only way he can do this is to take out the current number one assassin in the world, Gunther (Arnold Schwarzenegger).

But killing Gunther isn’t enough. Blake wants documented proof to show the assassin underground; and decides to threaten a documentary crew into service in order to record everything. And from there on things get a whole lot messier…

When I think back to the few great mockumentaries I’ve seen over the years, like What We Do In The Shadows or The Confederate States of America, one shared aspect is their low-budget restriction. And that’s understandable, as telling a story through the lens of a documentary allows natural limitations that would not be acceptable within a narrative told through traditional means.

It also explains why we rarely see action mockumentaries. After all, the nature of action is that it should contain balls-out explosions with plenty of overhead shots and combat. Clearly a documentary-style film is the antithesis of that. And that’s probably the best explanation as to why Killing Gunther always feels…odd.

Though director (and writer/star) Taran Killam clearly does his absolute best in his directorial debut, there’s no hiding the fact that the handheld approach acts as more of a crutch for a production with few resources, rather than as a way of enhancing the story. While a handheld action movie shouldn’t automatically be expensive, it’s hard to overlook that the few films to have been a success, like Cloverfield or District 9, had massive budgets behind them.

As a result of this resource restriction, the action scenes here are generally filled with CGI bullets and explosions, as well as unusual cinematography and lighting choices. (For example, the buildup immediately before the climax is shot entirely in night-vision, and makes things almost impossible to discern). That said, there is one standout moment where, while hunting down Gunther in an office building, the action is shown through an impressive single-camera tracking shot.

However, even poor production values can be overlooked with a strong script and/or characters. Unfortunately the film doesn’t do particularly well there either. The dialogue comes across as rather clunky, most of which eschews subtlety for slap-in-the-face obviousness. And while most of the characters are likable, with Moynihan’s incendiary device buffoonery being a nice touch; the large majority of individuals are one-note, merely being defined by a singular attribute.

But such poor characterisation does have one exception… The Austrian Oak himself. 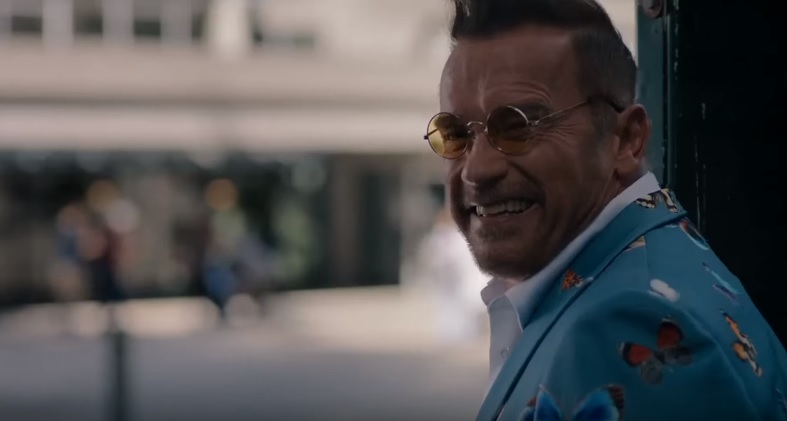 The third star given in this review is entirely down to Schwarzenegger’s utterly astounding performance as the titular Gunther. In the last 30 years of movie-making there has never been a better example of an actor single-handedly saving a movie with less than 10 minutes of screen time. The man is clearly having a blast, parading around in a variety of costumes and disguises as he sings country music (which, in an Austrian accent, is an absolute hoot!)

But despite the radiance of Schwarzenegger’s performance, it’s asking a lot for an audience to sit through nearly 80 minutes of amateurish film-making for barely a quarter of an hour of brilliance. As such, it’s hard not to see Killing Gunther as being a great idea that was poorly executed.