Click here for the introduction and the first review in my Jack Nicholson Retrospective.

Now this is more like it! The 4th entry in my Jack Nicholson Retrospective is a huge step up from previous offerings!

A full 90 minutes! A trio of great actors! A horror/comedy! Written by sci-fi master Richard Matheson! Directed by Roger Corman!

What’s not to love? 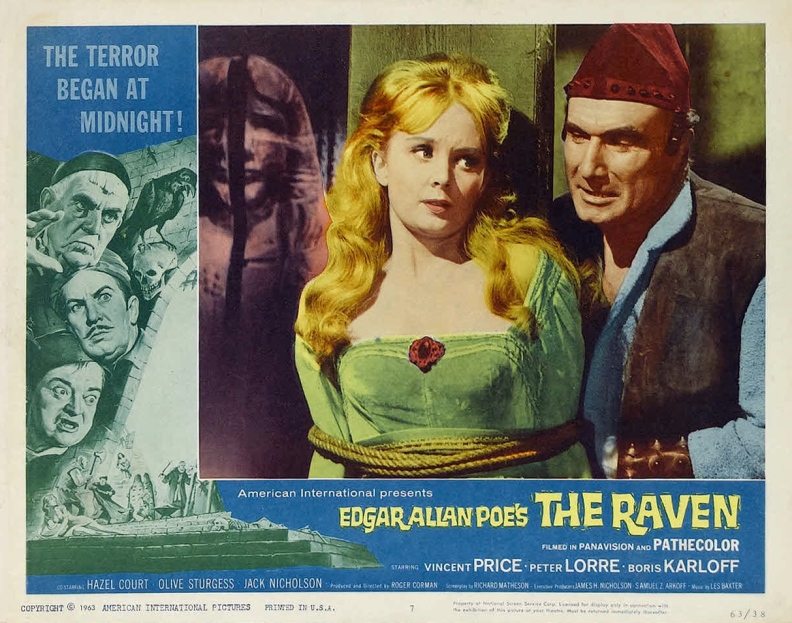 Taking place in the 1400s, widower magician Dr. Craven (Vincent Price) lives with a heavy heart. Having lost his wife Lenore (Hazel Court) two years ago, Craven has withdrawn from participating in the magical community; instead preferring to spend his time alone with his only daughter, Estelle (Olive Sturgess), for company.

But out of the blue, a talking raven appears in his study. After restoring said raven to his proper self, he realises that he was talking to fellow magician Dr.Beldo (Peter Lorre). Bedlo explains that while dining with the evil Dr. Scarabus (Boris Karloff), he was transformed into a raven during an unfair duel.

Wanting revenge, Beldo also mentions he saw Craven’s dead wife while dining, and believes that Dr.Scarabus may have captured her soul. As preparations are being made to leave, suddenly Dr.Beldo’s son, Rexford (Jack Nicholson), turns up to aid in their quest.

Together the foursome must enter the lair of the evil magician and discover the truth. But what they find is totally unexpected.

The first true comedy of Nicholson’s career is indeed an excellent one. While the title of the feature may suggest the plot had some relevance to Edgar Allen Poe’s poem The Raven; the poem itself is only mentioned as bookends and its influence on the story is minimal at best. Rather the majority of the story is centred around far more magical and comedic themes.

Nicholson himself doesn’t actually appear until the 25 minute mark. Because of this the beginning of the film really belongs to Price and Lorre. Feeling sort of like a play, the film’s opening takes great joy in bouncing these two disparate characters off each other, resulting in some hilarious lines.

Dr. Craven: You need something to protect you from the cold.

Once Nicholson appears, he essentially becomes the straight man to Lorre’s character. The interplay between these two character is wonderful as the son fruitlessly tries to keep his father’s overactive jealously in line. Honestly, if I didn’t already know that Nicholson would go on to have a career steeped in horror and violence, I would have thought he would have a great career as a comedian.

The introduction of Karloff as the film’s primary villain is a stroke of genius as he brings every ounce of his classical training to the screen. Pairing up his traditional Shakespearean acting with the more down-to-earth and excitable Lorre helps lead to some of the film’s best scenes.

While the main trio of men tend to have fairly well rounded roles, the womenfolk don’t fare quite as well. Sturgess mainly exists to be a traditional damsel in distress, while Court does have a little more to do in a slight villainous role.

I wish though, that a little more effort had been spent on the film’s score. Composer Les Baxter veers widely between tunes of a horrific nature and much more stereotypical comedic music. A subtle blend of the two would have, in my opinion, led to a much stronger film.

Alongside the music there are, of course, magical duels aplenty. They don’t quite match up to the bombastic battles of the Harry Potter franchise (as you might expect!); but if you take into account the comedy genre that the film is aiming for, said fights are still reasonably entertaining.

While there are some minor flaws, the silly nature of The Raven generally covers these cracks and helps create a film that provides some genuine laughs. Add in Nicholson’s best performance and you have solid movie guaranteed to entertain.