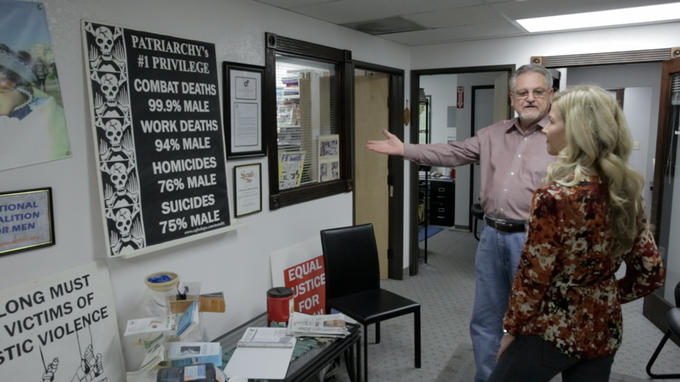 Author’s Note: I contributed financially to this film’s Kickstarter

I have a confession to make.

When I came across The Red Pill‘s funding page on Kickstarter, I thought I was contributing $50 to what was a fascinating idea that was guaranteed to end up in a car crash. I mean, a woman trying to connect with Men’s Rights Activists (MRAs)? Surely that’s like a black guy getting involved with the KKK? Or a gay person trying to chum up to the Westboro Baptist Church?

Fortunately though, Cassie Jaye (director of Daddy I Do and The Right to Love: An American Family) managed to explore the subject of MRAs in relative peace and ended up coming out with a fascinating story to tell.

Camera in hand, Cassie Jaye goes on a journey to document the world of the American Men’s Rights movement. Talking to a variety of figures on both sides of the arguement, it seems the situation is far more complex than the simple “MRAs = Bad, Feminism = Good.” Over the course of filming, Jaye learns of the various ways men are disadvantaged and discriminated against; and is forced to confront and question her own views on the subject.

My only real experience of MRAs comes mainly from watching news coverage of the now defunct Fathers 4 Justice back in the early 2000s. I was only a teenager at the time, but their antics were definitely memorable. However, like most organisations run by anger and malevolence, they ended up disbanding after a few imbeciles planned to kidnap the youngest son of then Prime Minister Tony Blair.

And so for many years I’ve seen MRAs as the gendered equivalent of organisations such as the BNP or the National Front.

Deriving its title from a term commonly used by MRAs (who in turn have borrowed said term from a scene in The Matrix); The Red Pill allows its interview subjects on both sides to speak freely without interruption. Through their words we hear various tales relating to the high rates of male suicide, the lack of services for male victims of domestic violence, and other issues relating to men’s hardship and discrimination

In fact one of the most powerful points that Jaye uses to illustrate men’s disposability compared to women is the revelation (at least to me) that the Nigerian terrorist group, Boko Haram, have spent years murdering thousands of boys and men, but the world didn’t care until they decided to kidnap and enslave 300 girls in 2014.

But its the half way point of the film where the introduction of “Honey Badgers” that makes the problems that men face more apparent. It had never occurred to me that women might be involved in the Men’s Rights movement, but the Honey Badgers are exactly that. A group of women that choose not to align with feminism, instead feeling that true equality lies in helping men.

Whether or not you believe MRAs need to exist, The Red Pill makes a brave stand in pointing out that our emphasis on helping women has led to us to ignoring, or at least downplaying, the plights that some men must face in a world that automatically assumes they are the stronger sex.

That’s not to say the film doesn’t have its flaws. I would have liked the film to at least acknowledge the more toxic aspects of the men’s rights movement, as it does with the aggressive elements of the feminist movement. Even a cursory search of the documentary’s main interviewee, Paul Elam, leads to several rather distasteful and misogynist comments and articles. Why Jaye chose not to challenge Elam on this is indeed a little puzzling.

Even with the admitted negative experiences that some men have to endure, there isn’t really a lot of evidence in the film that could suggest this is directly the fault of women or feminism. Unlike the infamous Donald Trump photo, its not as if women are sitting around a table and taking away the rights and lives of millions of men at a stroke of a pen.

In the end, this is one of the most complex subjects challenging our society today, and I give full props to Jaye for tackling said subject in the face of what I am sure is going to be months and years of verbal tirades and abuse.

While the film doesn’t in anyway convince me that women have it better than men (and to be fair the film does not claim as such); I do now see MRAs in a slightly different light.

Of any group, whether it be Feminism, Islam, politicians or immigrants, 90% of members are the people we see everyday. The people that work hard for positive change, sometimes in the face of overwhelming odds. But there’s always that last 10%. That small group of people with the loudest, and often most offensive and disruptive voices. The group of people that almost always become the definition of the cause.

Perhaps it might be time to apply the 90/10 rule to the MRAs?

The Red Pill will be released on various VOD platforms on 7th March.