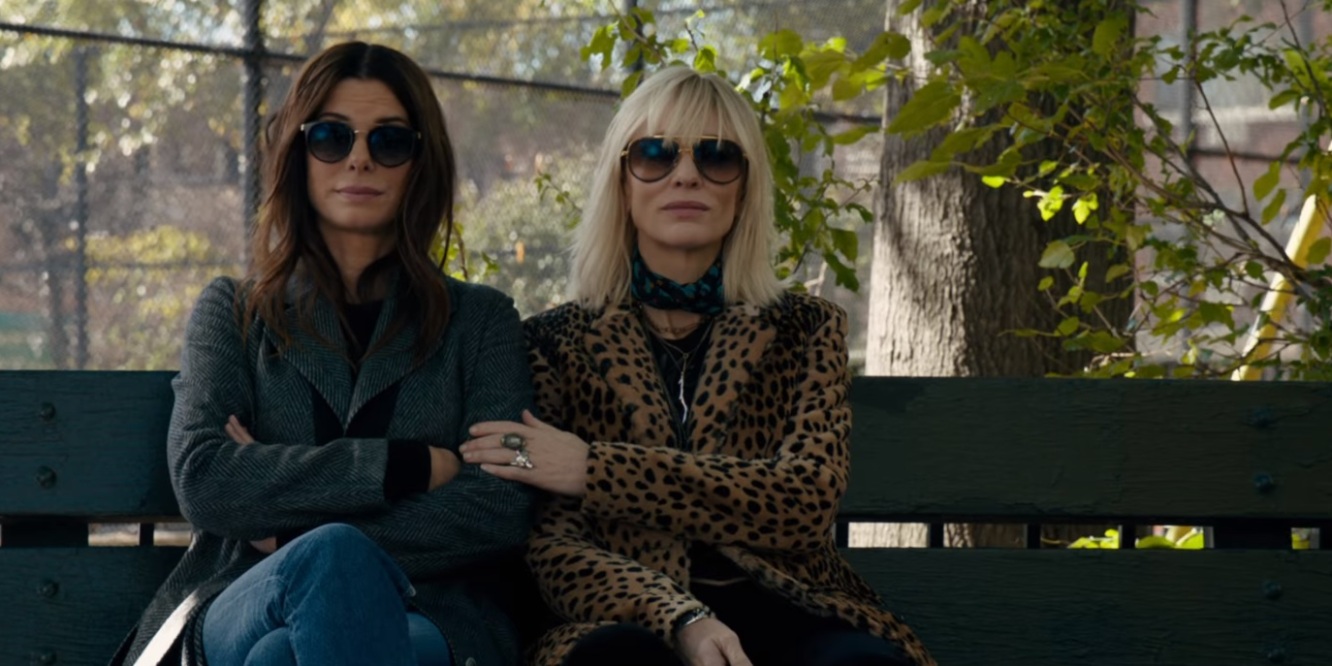 I’m still in two minds about the whole “all-female” reboots that Hollywood has suddenly got a hankering for. On the one hand, it’s great that more female-led properties are on the big screen, giving us a new spin on some well-worn genres (especially so in the case of the heist movie, which usually is a heavily male affair.)

But on the other hand, this really does put another nail into the coffin of originality, doesn’t it? Would it really have been so bad to just have an all-female heist movie without the label of a pre-existing franchise? Well, considering we’re about to get a (spectacularly-missing-the-point) all-female version of Lord of the Files, perhaps the lure of an established label is just too financially tempting to give up?

To be fair though, there isn’t anything particularly masculine about the plot of the first three Ocean’s movies. And the ensemble cast that director/co-writer Gary Ross has put together here is just as star-studded and glamorous as the originals. It’s just a shame that said cast shines far brighter than the script ever does.

Having just been released from prison, con-artist Debbie Ocean (Sandra Bullock) teams up with close friend, Lou (Cate Blanchett) to pull of the heist of a lifetime. Their target? The Toussaint, a $150 million Cartier necklace that will be draped around the neck of Daphne Kluger (Anne Hathaway) as she enjoys a night at the illustrious Met Gala.

But such an epic score needs an epic team. To help them with their task, Debbie and Lou hire down-on-her-luck fashion designer, Rose Weil (Helena Bonham Carter); crafty computer hacker, Nine-Ball (Rihanna); quick-fingered thief, Constance (Awkwafina); jewellery expert, Amita (Mindy Kaling); and expert infiltrator/fence, Tammy (Sarah Paulson). Only together will the team be able to pull out all the stops and avoid the stalking glare of insurance fraud investigator, John Frazier (James Corden).

Unless you happened to have viewed the 2015 box office disappointment, Our Brand is Crisis; it’s safe to say most people haven’t seen Sandra Bullock since 2013’s Gravity. And five years is far too long for such a gifted actress to be absent from the silver screen. Because of her, the first 15 minutes of Ocean’s 8 are a masterclass of character introduction, with the Ocean sister slyly grifting her way through the high-class stores of New York.

Actually, all the actresses that make up Ocean’s 8 are well cast, bringing a smorgasbord of style and panache to even the most colourless scenes. And no one does this as well as Hathaway. Playing a nitwitted and narcissistic celebrity actress, she is an absolute godsend, stealing almost every scene she’s in. One standout moment where she’s admiring herself in a mirror is almost worth the price of admission alone.

But that brilliance in casting and the resulting cast interactions are pretty much the only high point of Ocean’s 8. While director Gary Ross does his best, he’s no Soderbergh. Without that magic touch, multiple aspects of the film end up seeming rather pedestrian. One example being the editing from Juliette Welfling which, unlike the slick and stylish attitude of the original trilogy, gives way to a far more lifeless approach.

The one exception to this are the striking costumes by designer Sarah Edwards. With a now dominant female cast, a lot of the glitz and glamour missing from the movie’s surroundings are instead transferred into gowns that would not be out of place at the real-life Met Gala.

The script, written by Gary Ross and Olivia Milch, could be said to almost be a carbon copy of the 2001 Ocean’s 11. But there are many ways in which it doesn’t reach the same heights. One such instance being that much of the movie is spent without a clear villain. Say what you will about the logical fallacies of Ocean’s 11-13, but at least they had clearly established bad guys that you wanted to see taken down. But in Ocean’s 8, the primary victims end up being the poor innocent sods that work for Cartier. As such, while all the Ocean’s movies are primarily about money, this installment has no additional altruistic angle for audiences to latch onto.

In fact, it’s not just the lack of bad guys, but the lack of overall conflict between the primary players that makes this experience slightly dreary. Take any heist movie (say like, Inception or Fast Five) and you’ll see tons of disputes and fighting between the characters. Mostly as they argue over the best way to get things done or try to deal with events as they go wrong. Ocean’s 8 however, seems to have eight people who have (mostly) never met each other before this heist, and yet seem to get along perfectly throughout the entire piece. It’s hard not to have a sneaky suspicion that perhaps this was done to avoid reinforcing this old joke by John Mulaney.

Better than Ocean’s 12, but not as good as Ocean’s 11 or 13; Ocean’s 8 sits comfortably in the middle of the Ocean’s saga. But despite the flaws of this 2018 movie, it’s clear that Warner Brothers have succeeded in giving the Ocean’s franchise an electric shot in the arm purely because of its brilliant casting. Assuming all these wonderful actresses agree to return (with a stronger script and director), this is definitely a franchise that deserves to see out a trilogy.