If you’re interested in finding out more about my new series then click here. Otherwise carry on!

[SPOILERS FOR THE ENTIRE FILM]

Released in 1984 and directed by James Cameron, The Terminator was an astounding entry into both the thriller and sci-fi genres, and propelled both the director and his leading man, Arnold Schwarzenegger, to Hollywood stardom.

HOW DID IT END?

Set in an industrial factory, the film ends with the deaths of Kyle Reese (by the method of fiery explosion) and the Terminator (by the less fiery, but no less effective crushing method), thus allowing Sarah Connor to survive. Sarah then heads to Mexico and becomes a fugitive from the authorities.

To a certain extent we do know what happened next based on the events of Terminator 2: Judgement Day. A deleted scene from T1 shows that the events of the finale took place in a factory belonging to Cyberdyne. The surviving arm of the Terminator was taken to be researched and leads straight to the latter half of events in T2.

But let’s not go that far forward. What would have happened immediately after T1 ends?

We are talking a manhunt on the scale of a Presidential assassination. The entirety of Los Angeles would be on high alert. This is an absolutely nationwide (if not worldwide) piece of front page news. The best real life comparison I can think of would probably be the Beltway sniper attacks in 2002.

The same kind of fear that the people of Maryland/Washington felt would be coursing through the veins of the citizens from LA. The emotional trauma alone would be off the charts. You know how many people the Terminator kills? Check out the video.

29! Twenty nine people are murdered in less than 72 hours! In 1984, that would make it the deadliest shooting in US history. And what makes it worse is that 17 of them are police officers from one station!

That immediately gets the Terminator on the FBI’s most wanted list. Right now, the 10 people on that list generally “only” kill 1-3 people. There’s no way someone who straight up murders nearly 30 people, half of them in broad daylight, doesn’t make that list! 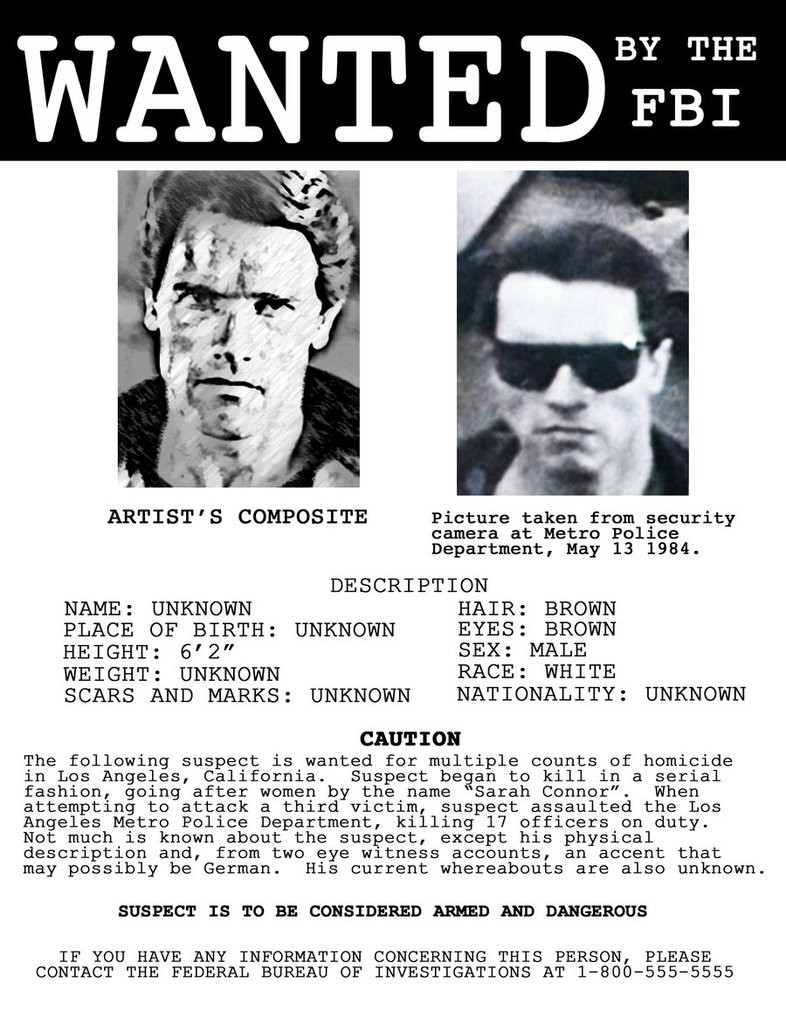 However, there would be a minor few that would feel perfectly safe because of the fact the media has already widely publicised that the Terminator was hunting people called Sarah Connor.

But those women called Sarah Connor? They would be shaking in their boots! According to howmanyofme.com, there are 86 Sarah Connors living in the United States right now. Assuming that a similar number were there in 1984, I would not be surprised if all 86 were taken into police custody for their protection.

Within 24 hours I think the police would have found out that the Terminator had a German/Austrian accent and this now becomes an international incident. Now it’s not just the Police/FBI, but now the CIA are getting involved. After all it could have been a terrorist attack from a foreign power.

The governments of Germany and Austria would immediately pledge their full co-operation and I’m willing to bet 2-3 people who kind of look like Arnold Schwarzenegger are immediately taken in for questioning.

All these people would be released pretty quickly as they would have the cast iron alibi of it being impossible to get from LA to Germany/Austria in less than 24 hours. (Remember this is 1984)

By now the public outpouring of grief would be off the scale. Donations would come in from all over the country to help the families of all 29 people killed, not to mention the dozens more suffering from PTSD. And, similar to real life, there would most likely be public funerals for some of the victims, while a few would remain private.

What really interests me though is how seriously would the authorities take the story spouted by Kyle Reece in the police station?

The one line that stands out for me is the one said by Dr Silberman:

You see how clever this part is? How it doesn’t require a shred of proof? Most paranoid delusions are intricate, but this is brilliant!

I would assume every single person watching this video would feel the same. Clearly the man’s delusional. But I think what would come up time and time again in the investigation is how the hell did these two people (Reece and The Terminator) end up having the exact same delusion?

Over the next few weeks the press would be hounding the police, demanding answers on “The Phone Book Killer.” I assume several people would be arrested and released too.

The investigation would also intensify as soon as the police realised that Sarah Connor had gone missing. They would have no idea she had purposely gone into hiding, and so would have jumped to the conclusion that the Terminator has succeeded in killing her and hidden her body.

Gradually people would move on. In fact the next mass shooting, in real life, would take place only 2 months later, in July 1984, at a McDonalds where an 8 month baby was shot in the back. I can only assume that would have wiped out any mention of The Phone Book Killer from the newspapers.

Club Tech Noir (where Sarah tries to hide) would most likely close and maybe a monument would be placed there to commentate the 29 lost lives. (though this could also be placed outside the police station.)

Over time people would forget the events of those 3 days in May 1984. Maybe every so often the case would be reopened, or the story would be mentioned on one of those “True Crime” TV shows. But the events would more or less fade into history until 1995 when the events of T2 take place.

Next month: What happened next in… WALL-E?

2 Replies to “What happened next in… The Terminator?”