Click to read my review for Episode One, Two, Three and Four

Spoilers for all previous episodes of A New Frontier

Sometimes it really doesn’t matter how hard you write or how groundbreaking your story is.  Because in the end… It’s all about the ending.

But in this arena Telltale have some extensive experience. Their climaxes for season one and two are among some of the most heart-wrenching pieces of video game storytelling. Hopefully this bodes well for From the Gallows, the fifth and final episode of A New Frontier.

Kicking off with another pre-apocalypse scene, we’re reminded of the strained relationship between Javier, David and their father before jumping forward to the cliffhanger events of the previous episode.

While overcoming the immediate danger of Richmond, Javier and his team must try to mend the emotional and physical wounds of those who have suffered; while at the same time deciding whether Richmond is a place worth saving.

If it was possible to distill the entire experience of A New Frontier into one word, that word would undoubtedly be “Family.” With such a complex bond between brothers Javier and David, constantly seeing the two battle each other has been one of the highlights of the story; and resolving said conflict was always going to be the crux of Episode 5.

Unfortunately whilst it may have been the crux, it was not, as I expected, the climax. The game instead decides to structure the episode’s second half into two paths; one which follows Javier and David, while the other focuses on Javier and his relationship with Kate.

Both relationships arguably make up the two halves of Javier’s psyche, and to have one of those resolved off-screen lends a sense of disappointment to the proceedings. 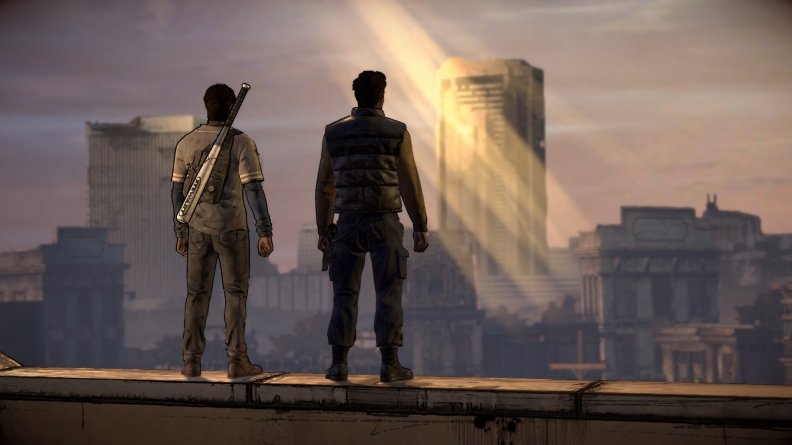 Outside of these two primary relationships, Telltale have done what can only be described as a borderline schizophrenic job in portraying some characters. In the case of Clementine, an excellent effort has been made, bringing the tender child of Season One to a close, while allowing her to set off into the new journey of teenage-hood.

And yet with Gabe, there’s a sense of inconsistency as we watch him veer wildly between admiring nephew and devoted son. For a game that has spent nearly 6 hours regularly emphasising how mature and intelligent Gabe is, he sure is dumb as shit.

But even if the charactisation had been improved, it’s somewhat let down by the occasional glitch, which on one occasion, managed to destroy the impact of the scene by introducing a flying horse!

That said the final moments of the episode are far more uplifting than previous seasons. That glimmer of hope for a better future is rather the antithesis of what The Walking Dead usually stands for. It’s as if Telltale finally thought: “You know what, enough with the depressing stuff!

While tying up the various story-lines of A New Frontier in a nice little bow, From the Gallows makes it clear that the last five episodes were more of a side-quest in Clementine’s story to reach adulthood; and as such Javier’s journey feels more forgettable that you might want.

2 Replies to “The Walking Dead: A New Frontier – A Review of From The Gallows”