Being of both British and Asian descent, I’ve always been very well aware of the two sides to Winston Churchill. (For my American readers, when I say Asian, I mean Indian.)

From my British education, I’ve learned how Churchill is generally considered, not only a great Prime Minister, but also one of the greatest Britons that ever lived. A man who led his nation in a time of despair and, in the face of overwhelming evil, secured freedom for generations to come.

But on the other hand, from my Asian heritage I learned the darker aspects of Mr Churchill, such as his doggedly refusal to acknowledge India’s desire for independence, or his oddly over-the-top insults of Gandhi:

“(he) ought to be lain bound hand and foot at the gates of Delhi, and then trampled on by an enormous elephant with the new Viceroy seated on its back.”

In addition, his refusal to provide food to Bengal (or allow other countries to do so); led to the widely reviled 1943 Bengal famine and the deaths of 1-2 million people. Indeed, when told about the famine/request for food, Churchill was said to have sent a telegram back in response asking why Gandhi hadn’t died yet.

That said, I recognise that films always present a certain point of view, and being that Churchill is a British film, it’s not unreasonable to assume that said presentation will largely be positive. But is it still an engaging film? 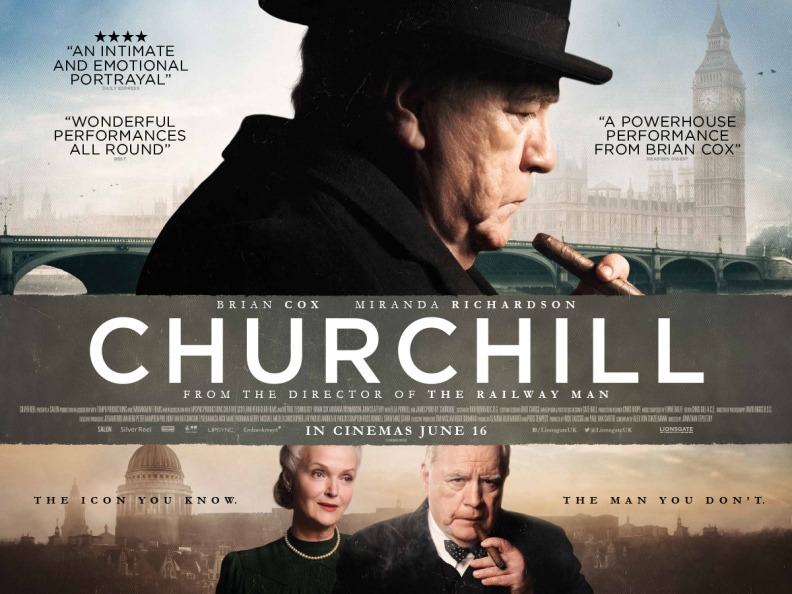 The year is 1944. The British Prime Minister, Winston Churchill (Brian Cox), has come together with the other leaders of the Allied forces: General Eisenhower (John Slattery) and Field Marshell Montgomery (Julian Wadham).

Having reservations over the European liberation plans known as Operation Overlord; he insists the plans be rethought. But with thousands of troops already moving into position, military leaders are hesitant to take his advice.

As D-Day approaches, Churchill must deal with the frosty relationship he has with his wife (Miranda Richardson); as well as battling not only his own doubts, but also his guilt from his service during the First World War.

From the numerous books and visual media produced on the man, there is no doubt that Churchill is both a complex and engaging individual. But through the lens of director Jonathan Teplitzky, all we truly experience are tedious pontifications and over-the-top protestations.

Mostly this is down to the rather stilted screenplay by historian Alex von Tunzelmann. As a screenwriter myself, I am in no way opposed to flourishes that may not quite meet the definition of historical accuracy. But even with that in mind, Tunzelmann takes so many liberties that it’s hard not to be reminded of 2004’s Churchill: The Hollywood Years. (Yes, that’s a real film!)

Firmly a character piece, a slender amount of applause should be given for the attempt to explore Churchill the man, rather than Churchill the icon. But said attempt ultimately fails as the choice to present the protagonist as an ineffective and amateurish leader is an odd one. With dialogue that sounds like it’s from a first year film student who rushed to meet an end of year deadline; Tunzelmann’s screenplay is indeed impressive in its illustration as what not to do when crafting a story for the big screen.

Though it’s difficult to see exactly what drew so many fine actors into this mess, Brian Cox is the film’s one saving grace. While his grouchy and cantankerous performance does not elevate the material, it is more than apparent he has used all his energy and passion in an attempt to spark life into this otherwise frigid carcass.

While possessing a grand central performance from Cox, Churchill never once overcomes the plodding nature of its script. It may not the worst film of 2017, but that’s more or less the only plaudit this film will ever receive.