Well that came out of nowhere.

Not content to unleash a trailer for Cloverfield 3 / God Particle a mere two months before its cinema release (like they did with 10 Cloverfield Lane); it seems JJ Abrams and the Bad Robot team took it one step further and released the entire film on Netflix!

Of course, there had been rumours for a few weeks that Paramount had sold the movie to the streaming giant. But to drop a $40 million product on a streaming service with no prior advertising…. well, it just goes to show how much Netflix have changed the Hollywood landscape.

Still, it is quite refreshing to go into watching a film with almost zero hype and absolutely no clue of the plot, (which is saying something since the damn film was on my list of most anticipated films of the year!)

But does the fact that Paramount were willing to rid themselves of an installment in one of their most profitable and sucessful franchises indict that all is not well? 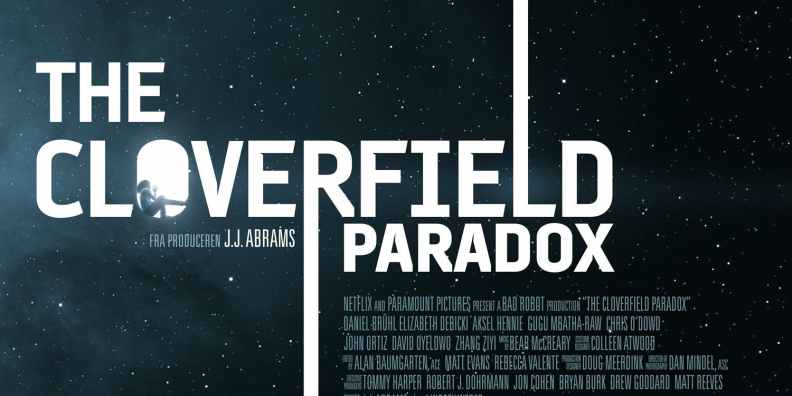 The year is 2028 and Earth is on the brink of war. An energy crisis has caused large parts of society to break down and their only solution is the “Shepard”; a massive particle accelerator about to be tested aboard the Cloverfield Space Station. The hope of all involved is that the machine will provide the Earth with an unlimited supply of clean energy.

Though it takes several years and attempts, the Shepard finally achieves a stable energy beam. But this is the only good news, as the massive station is immediately flung through space to an unknown destination.

With the space station now on the verge of ultimate failure, the crew must try to find their way back home, all the while dealing with mysterious happenings that threaten to tear them apart.

Directed by Julius Onah, The Cloverfield Paradox (TCP) is a somewhat strange film to be released under the Cloverfield label. The first two films were notable for putting new spins on well-worn story tropes; Cloverfield being a big-budget monster movie told through the shaky-cam of a Blair Witch lens, while its sequel was an intimate character piece with added sci-fi trappings.

TCP though, does nothing new with its “trapped in space” storyline. You have the usual assortment of underdeveloped characters put into a perilous situation, before being killed off one by one. Throw in a traitor, the “Final Girl”, and exposition that makes the first 20 minutes sound like a physics lecture delivered by a gushing Steven Hawking; and your result is a low-rent B-movie masquerading as a blockbuster.

To be fair, even calling it a B-movie might be a stretch as TCP seems to ignore one of the most important aspects of storytelling. The fundamental success of a sci-fi horror (or indeed most films) is down to a clear antagonist. For most movies of this genre it tends to be a creature or monster, a la the Xenomorph in Alien, or that weird tentacle creature in last year’s Life. But success can also be achieved with more abstract villains; such as “time” in Interstellar or The Martian; or “space” in Gravity and Apollo 13.

However TCP has neither, instead relying on random events that are either unconnected or just make no logical sense. It feels like writers Oren Uziel and Doug Jung have mashed together several scripts and genres with very little thought as to how everything would come together. That said, some of these events are weird enough to at least be memorable. (The word “stowaway” takes on a hell of a different meaning here!)

Fortunately there’s a strong cast, despite the fact they are far above the material they’ve been given. Hailing from a bevy of nations, the story is guided by Ava Hamilton (Gugu Mbatha-Raw), a young woman unable to deal with the loss of her children years earlier. It’s the closest the film has to a human connection, as well as being the film’s only saving grace. The remaining actors are generally defined by either their nationality or job title; though it’s hard not to have a soft spot for Chris O’Dowd as the comedic relief.

Essentially acting as a sort of “Big Bang” that explains the reasonings and events in Cloverfield and 10 Cloverfield Lane; The Cloverfield Paradox does an passable job in (loosely) tying together the entire Cloverfield franchise, as well as setting up multiple potential films for the future.

But as a stand-alone film, this sci-fi journey is mostly a misfire. Perhaps in future the Bad Robot team should take a leaf out of The Twilight Zone / Black Mirror playbook, rather than the Marvel Universe approach they’ve attempted here.