While the similarities between a successful documentary and a successful fiction film are too numerous to list, one shared aspect is a portrayal of either conflict or drama. Doesn’t matter how or why it’s presented, but to obtain an engaging narrative means that a battle of ideals must be present. Otherwise you might as well be watching a montage of summer vacation recordings.

The Final Year should have that in spades. After all, it’s set during 2016, the year where Donald Trump defied all expectations and won the American Presidency. With a campaign that was mostly based on division, surely there must be plenty of opinions by (and comparisons to) the Obama administration? Alas, a different tact is taken, resulting in a film that is far more pedestrian than it should be.

Covering the closing 12 months of the Obama administration, The Final Year features various high-profile American political figures as they attempt to make the most of their final 365 days in office. Trying to bring order to an increasingly fractured world, we follow a trio of Obama’s foreign-relations team: Secretary of State, John Kerry; ambassador to the UN, Samantha Power; and deputy National Security Advisor, Ben Rhodes.

While I’m sure there will be a handful of people out there that will disagree with my assertion, I am of the opinion that the most engaging portrayal of American politics was Aaron Sorkin’s The West Wing. Yes, it may have been incredibly liberal-leaning, but it still expressed the basic ideal that these characters were merely trying to do what they thought was best in a difficult world.

However, when re-watching almost any of its 156 episodes, it’s hard not to see a sense of naivety in its political warmongering. There are no “alternative facts”, no post-truthisms, no ranting political rallies. In other words, its politics appear out-of-date and old fashioned. And just like The West Wing, The Final Year is a portrayal of a world that was once relevant but now feels long gone.

That said, it’s hard not to have a certain level of respect for those involved. With the knowledge that they only have a year left to effect change, it’s impressive to see the then 72-year-old Kerry journey around the world with the energy of a man half his age. In fact, the ultimate achievement of director Greg Barker and his team is their success in humanising certain political actions. For example, through the eyes of Secretary Power, we see the pain of women losing their children, as well as the plight of the displaced. By shining a light on what are usually unseen and unreported actions, the filmmakers have given voice to the idea that politicians are, at their heart, still people. 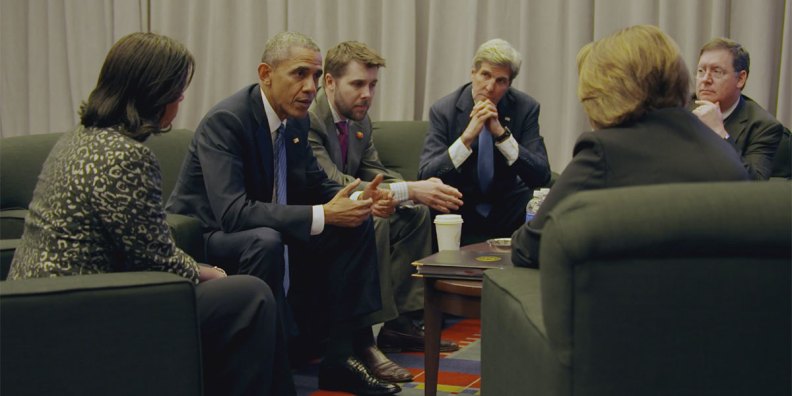 But as mentioned in the introduction, there is no drama. With everyone on the same page, there are no real clashes of ideals or beliefs. The closest the film comes to such a conflict is when there is a minor skirmish between Power and Rhodes over the “hopefulness” of President Obama’s final UN speech. Imagine watching a season of The West Wing, but every single argument was cut out. That’s roughly what The Final Year has achieved, and as such makes a far less engaging film than other political documentaries such as Weiner or The Fog of War.

Indeed, it’s hard to ignore the nagging feeling that all this was for naught. Just as a form of illustration, imagine you were out on the roads painting road markings. Would you spend any time caring about how accurate or clean the lines were if you knew a lorry was barrelling towards you? Guaranteed to destroy everything you had spent the last couple of days creating. That (admittedly simplified comparison) is what The Final Year ends up being. A film about people striving to do things that fundamentally do not matter because of what we know the future will bring.

If anything, maybe the team behind The Final Year should have pivoted in the same way Lauren Greenfield was forced to do for the 2012 documentary The Queen of Versailles. While Greenfield’s initial goal was to document the building of the most expensive house in America, due to the 2008 financial crisis she was forced to change the basis of her film. Perhaps a similar change to The Final Year, instead focusing on how the film’s subject’s were dealing with the looming threat of Trump, would have made for a far more engaging film.

In decades to come, when the chaos of the Trump administration is long gone, it can be expected that The Final Year will be seen as a calm humanist look at the close of just another administration. But right now, it’s hard not to think of the alternative and more interesting paths this documentary could have taken. A real missed opportunity.