While they were all astonishing games, my personal game of the year wasn’t any of these big budget blockbusters, but rather a small mobile game from Loveshack Entertainment titled Framed.

Though short in nature, Framed did what far too many mobile games fail to do: come up with a unique game-play idea that would be perfect for touchscreens and then run with it!

But with the release of a sequel, the simple problem is there’s now a sense of expectation. So, does Framed 2 match up to the original; or is it nothing more than a repetition of a three year old idea? 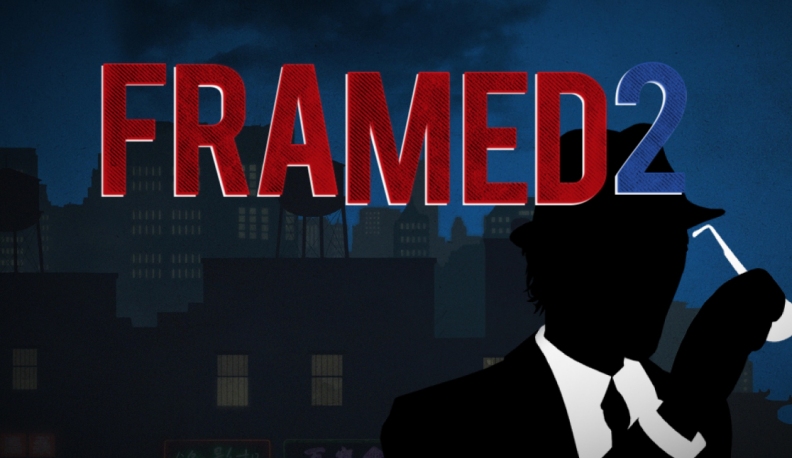 With only a minutiae of plot to speak of, Framed 2 follows a sunglasses-wearing silhouetted man (and later a woman) with a suitcase and its valuable contents. Both of them must work together to try and outrun a mustachioed villain who relentlessly chases them down.

The actual challenge, however, comes from the “choose your own adventure” aspect of the game. With a mixture of puzzles and cutscenes, the player is required to arrange several panels, in the style of a comic book, in order to make sure the man and woman reach the end without getting caught.

Talk about going beyond your expectations!

Much like F.T.L. or Limbo, Framed 2 is not afraid to offer its player a challenge. Indeed, rearranging panels, the core mechanic of the game, is only the beginning of introducing this colourful world. Soon enough panels are required to be rotated and reused, all the time ticking down to the inevitable conclusion.

That said, the game does ease you into things. In fact, it might be worthwhile still purchasing the original Framed as a sort of introduction or training exercise. (Only £3.99 on the Apple Store folks!)

Once the difficulty intensifies, failure is almost a guarantee at first. But like Tom Cruise’s many deaths in Edge of Tomorrow, the failure itself can be quite entertaining. Never has purposely getting a Rube Goldberg-esque situation wrong and seeing your character plummet to a watery grave been so fun! And similar to Valve’s Portal, once you actually work out how to succeed, you’ll feel like an utter mastermind.

Though only clocking in at about 1-2 hours playtime (depending on skill level), Loveshack have added an ounce of replay value by introducing collectible in-game Polaroids. Though not completely necessary, they add a sense of cartoony humour to the proceedings.

While still shorter than one might like considering the cost, Framed 2 more than blows its predecessor out of the water. Like Assassin’s Creed 2 or Portal 2, Framed 2 takes the good, ejects the bad and adds improvements until it’s bursting at the seams.

If anything, Framed 2 manages to attain the best of both worlds by being both a fast paced (within reason) action game, but infused with more cerebral aspects.

By living up to the already high expectations, Loveshack Entertainment have solidified themselves as a genuinely rare breed in today’s freemium/shovelware world.

Framed 2 currently costs £4.99 and is available to download from the Apple Store.